Game of Thrones Review: There Are Spoilers in This One 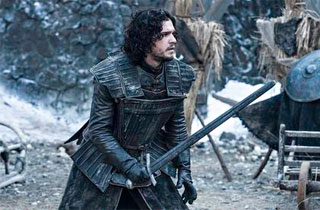 POLITICIANS: So that’s who did it.

Halfway through the show, Petyr Baelish gloats to Sansa Stark that he and Olenna Tyrell killed Joffrey in a tag team effort, using Sansa as an unwitting poison mule and Ser Dontos as the easily dispatched guy who knew too much. While Sansa stammers the same questions we all have — the Lannisters were good to Petyr, and Olenna’s granddaughter was going to be queen — Littlefinger points out that Joffrey was vicious and unpredictable, an obstacle in his quest for “everything.” “My new friends are predictable, very reasonable people,” he says. And it turns out that his new friends are the Tyrells, whose matriarch thinks nothing of asking Margaery to seduce a prepubescent boy to secure their influence over the king, post-haste. (Yeah, we just watched a boy enter puberty.)

But Olenna’s desire to casually kill the king of Westeros says quite a bit about the Lannister’s crumbling facade of power, in that the family’s starting to fracture deeply. And by family, we mean Cersei, whose grief has driven her to focus only on lopping off Tyrion’s head and lashing out at her brother/lover/rapist Jaime. This is the perfect time for the Tyrells to begin their psychological campaign on Tommen, Olenna points out — Cersei may be obsessed with protecting him and would kill Margaery if she knew about their night visits, but she’s in no state to nurture the traumatized little boy who suddenly became King.

The thing is, the Lannister’s reactions to Joffrey’s death are completely predictable as well. If Baelish is the puppetmaster, as he seems to be, he predicted everyone’s reactions — and memorably states that he doesn’t want anyone to predict his own actions:

Meanwhile in Meereen, Dany celebrates her victory by crucifying 165 Masters, one for each child she found crucified on her march. Barristan Selmy points out that showing no mercy not be the best way to finish one’s conquest. “I will meet injustice with injustice,” Dany snarls, and we can’t help but get the feeling that this is a terrible, terrible idea that will come back to haunt her. Some might argue that Daenerys is acting as a classical Machiavellian — it is better to be feared than loved, as his maxim goes — but it seems wholly unnecessary to crucify all those Masters, since she already has a fearsome reputation for cruelty across Slaver’s Bay. (She burned an entire city of Masters to death.) This passage from The Prince comes to mind:

A Prince should inspire fear in such a fashion that if he do not win love he may escape hate. For a man may very well be feared and yet not hated, and this will be the case so long as he does not meddle with the property or with the women of his citizens and subjects. And if constrained to put any to death, he should do so only when there is manifest cause or reasonable justification. But, above all, he must abstain from the property of others.

If the Masters view slaves as property — and, well, that’s the entire point of slavery — we predict that Dany’s not gonna have a good time.

WOMEN: Olenna. Always Olenna. She’s so good at playing the game within the boundaries of the Westerosi patriarchy, if that story about how she seduced her sister’s betrothed is any indication. (This is believable, because Dame Diana Rigg was a total babe.) Dany, the one woman who can play the game outside of the gender rules of Westeros, is growing reckless with her dragon power and her massive army, but she’s still running off the high of winning Meereen that we’ll allow it for now. Margaery is doing a great job as a creepy babysitter, and Cersei is losing it. Sansa still knows nothing.

FIGHTERS: Aw man, Grey Worm! If there was ever an episode that highlighted the Unsullied captain’s importance, it’s this one: he’s not only a capable fighter, but a fantastic military leader, what with his ability to instigate a rebellion and arm all the slaves in a city. Hey! Hey Jaime! What did you do this week? Oh, get bitch-slapped by your own golden hand?

Still blindly groping around in his attempt to be a good man, Jaime sends Brienne on a very noble quest to keep her vow to Catelyn Stark and protect Sansa, and presents her with his fancy Valyrian steel sword — only to have her name it “Oathkeeper,” a name that also bitch-slaps the Kingslayer in the face. Is Brienne the only good Ser (er, Lady) in Westeros? All signs indicate yes.

THE NORTH: Welcome to the North, where the power structures are made up and the rules don’t matter! Bastards can become respected! Peasants can drink wine out of a lord’s skull! And everyone who thinks that there are actually Rules (the new commanders from King’s Landing) is deemed an insufferable prick. Truly, the North is a abominable place to be.

But this anarchy — and indeed, it’s anarchy, no matter what people think — isn’t going to last very long, as the end of the episode reveals a terrifying fact about the Others: they’re sentient, organized, and have the ability to turn people into White Walkers just by touching them. AND THEY HAVE A KING. 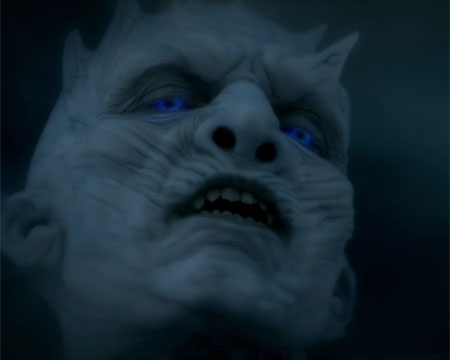 AAAAAH THEY HAVE A TERRIFYING SKELETON KING

(Who was actually mentioned by the series here, though the book readers definitely didn’t see this one coming). But considering they have goddamn winter magic, even the ice zombie babies are more menacing than the Night’s Watch.

HOUSES: Tyrell suplex in King’s Landing. The Lannisters are reeling and the King is a wide-eyed naif, and it’s all thanks to the Tyrells (discussion in next section.) In Meereen, Daenerys successfully instigated a slave rebellion and took over the city in the name of House Targaryen, and the Stark kids still prove that they have some value (Sansa’s being spirited to the Vale, and Bran saves his friends from getting murdered and raped by saying he’s a Stark). Nothing changes much. (The Martells are probably still banging their way through Littlefinger’s whorehouse.)

Tune in next week for even more Adventures in Creepy Power-Grab Babysitting. And Ser Pounce.