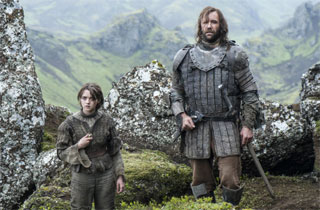 Welcome to the final edition of the Westeros Power Grid, in which we analyze and rank the players in each episode of Game of Thrones according to how well they play the Game. For the past season, we’ve reviewed how well the players did in each episode, and rank our top five in each category (Houses, Politicians, Warriors, Women, and The North).

Another season gone, another dozen or so beloved characters dead, and Westeros is still sliding painfully, unknowingly into a wintry apocalypse while everyone chases after their own compelling storylines. But it was, without a doubt, a season containing some of the best episodes in the entire series, and we pity the screenwriters who had to wrap up all the drama.

(If you’re a book reader, I sympathize with you, especially when it came to the glaring absence of That Woman. Which Woman? Exactly.)

HOUSES: If Season Three was about the decimation of House Stark, Season Four was about the slow disintegration of House Lannister from the inside. While we’ve generally praised Tywin Lannister’s ability to politically maneuver, he also used his children as pawns in order to do so — and then treated them like shit, which is generally something you don’t want to do with your pawns. Otherwise, your pawns resent you, and do things like demand a trial by combat. Or blackmail you with the fact that your grandchild on the Iron Throne is actually a bastard born of incest. Or shoot arrows in your chest while you’re taking a dump after screwing the girlfriend/whore of the dwarf son you just sentenced to death. Happy Father’s Day.

We won’t see or feel the repercussions of Tywin’s death until next season, but the fact that Varys is getting the hell out of King’s Landing indicates that, bluntly, the shit is gonna hit the fan — and that it’s probably going to be Cersei’s doing.

At the same time, Lannister still remains on top, primarily since Tywin’s machinations elevated two other houses to where they are today: the Boltons were given control of the North and the Tyrells are marrying into the King’s family. (Who knows how long that’s gonna last, though.) Following closely behind is House FireGod!Baratheon, making a long-term gambit that saving the realm from Wildlings and White Walkers will help them win the Iron Throne. In dead last: House Targaryen, which basically just disarmed its nuclear dragon weapons and turned itself into the Soviet Republic of Westeros. (From what we hear in casting news, Dorne and the Martells will raise hell next season.)

POLITICIANS: Season Four also revealed who was actually pulling the strings, and it wasn’t the gold-covered Tywin Lannister. Littlefinger, though at the mercy of a fifteen-year-old girl, still sits on top for indirectly causing every bad thing that happened in the series to begin with, and maneuvering his way into ruling an entire kingdom. However, it’s easier to climb to the top than it is to run an entire realm, and for that, Varys and Tywin still get major props — though, regrettably, Varys is fleeing King’s Landing for accidentally causing Tywin’s murder. (Why does no one ever factor Tyrion Lannister’s feelings into their plots, unless they’re trying to frame him for murder? It seems like a terrible idea at this point.)

Davos gets a shoutout in third place here, mostly because he’s the brains behind Stannis’s military movements and has his priorities straight, and Daenerys…well, when people are asking the Breaker of Chains if they can willingly sell themselves back into slavery, it’s a sign that the moral foundations of her conquest aren’t proving stable.

WOMEN: That’s not to say that Daenerys still isn’t powerful (she still rules over a huge city, after all), but she goes into the next season with tenuous control over an increasingly unhappy populace and her major weapons/children locked in a basement for the greater good. She still has an advantage over Cersei, though, who will soon find herself the only adult in the Red Keep with any sort of nominal, inherited power, and no terrible Dad to keep her in line. But if Cersei’s the type of paranoid person to blame Baby Tyrion for their mother’s death — even Jaime points out how ridiculous that idea is — she’s definitely not going to have a good time as Actual Ruler of Westeros. (We fear for Margaery, though, who has had the audacity to call Cersei old to her face. Oh do we fear for Margaery.)

But what’s this? Melisandre at the Magical Wall with the Magical Fire? And Sansa taking her first steps into the world of politicking and manipulation? It’s gonna get good.

WARRIORS: Brienne wins, not just for taking down Sandor Clegane (RIP), but for doing it while being kicked in the babymaker:

Seriously, though, it may not have been a series high like “The Mountain and the Viper,” but that brawl was one of the roughest, dirtiest fights we’ve seen in the series. Nevertheless, it ended up with Sandor begging for mercy, and Arya coldly denying it to him before, unexpectedly, taking a detour to Braavos to find a famous assassin’s guild.

In last places: Jaime, for also accidentally causing the death of his father (he’s sort of new to this entire “having a conscience” thing), and The Mountain, who looks like he’s about to be Frankensteined on Cersei’s behalf. The guy just wanted to crush people’s skulls, guys.

THE NORTH: The rankings here are self-explanatory, really. Stannis is now King, Jon Snow is the only person he’ll listen to, Melisandre has her freaky fire magic future powers, Mance has surrendered, and Tormund is in chains. But we’re gonna admit that we made a mistake here: with all this drama at the Wall, there’s no room to discuss the influence of actual, hardcore, Beyond-The-Wall magic that this episode hints at, with the arrival of the Children and the Three-Eyed crow. Next season, we might bring in Magic rankings, considering what book readers know is coming — thoughts?

Phew. That’s it. Season Four is done. We’re gonna go crawl into the box with Tyrion and wait for an entire year. Bye, guys.