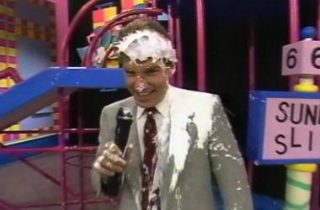 Children of the late ’80s and early ’90s best know Marc Summers as the host of Nickelodeon game shows Double Dare, Family Double Dare, and What Would You Do? But where has he been since? Well, he now hosts Unwrapped on the Food Network and he really doesn’t like it when you troll him on Twitter.

Out of what we will just assume was straight-up boredom, Twitter user “Frogman La Blanc” wondered aloud on Monday whether it could be considered a threat of violence for someone to tweet that they want to shake Summers’ hand (The context here: During the early days of his career, Summers spoke about battling obsessive compulsive disorder and several other anxieties, eventually working through it enough to shake guests’ hands and interact free of panic):

Summers must have a search for his own name on Twitter because he somehow found the tweet and pushed back rather aggressively:

@HolidayToad I don't get it! Btw, I am not germ phobic moron. Do ur homework

The insults then flew back and forth:

@HolidayToad @Ibatvmc nope. Mainly known for hosting and producing tv. How are things on the unemployment line?

And others jumped in:

@WretchedSnark lost ur sense of humor apparently. Too bad. All u twitter geeks can dish it but can take it

.@Ibatvmc Marc you are famous for a basic cable show where you dumped corn syrup on suburban families. You aren't worth trolling

@WretchedSnark good. Then go away. Heading back to one of my many homes!

@Ibatvmc @WretchedSnark do you feel bad knowing you have many homes because you hosted a game show but firefighters only own one!

@MauryCompson take all this with a grain of salt. Just screwing with people who have no lives. Firefighters, police and military are heroes

Full thread here. Well worth the glance if you’re bored.