The Best Strategies for Winning Jeopardy

Gaming the Game: 5 Unorthodox Jeopardy Strategies That Are Proven to Win

As of last night, Arthur Chu has won ten consecutive games of Jeopardy!, making him one of the top-scoring champions in the history of the quiz show. (There have been thirty years of Jeopardy!, which makes this a Big Deal.) However, he’s generated a lot of haters over his run for using completely quote-unquote “unorthodox” strategies, strategies that go against everything Jeopardy!’s audience holds dear.

To which I say: Bullshit. Jeopardy! is a game, and games are meant to be gamed. Sometimes with theory. And the winner is the one who plays the…game theory-est.

And yes, I take this all seriously. When I appeared on Jeopardy! last year, I spent two full months consulting every single strategy guide I could lay my hands on, whenever I wasn’t filling out flashcards of world capitals and chemical elements and such. I read J-Archive, I consulted former Jeopardy! champions, and, occasionally, I spent nights practicing my buzzer technique.

I still lost. But unlike most Jeopardy! losers, I lost with dignity (to the tune of $19,700) in a game declared one of the best ever played. So at least I have something to humblebrag about (I JUST WANTED THE MONEY). And now I have a lot of useless knowledge about the strategies used by the Jeopardy! greats to win all the money (IT WAS WITHIN MY GRASP). So I, a Jeopardy! scrub, shall share my secrets with you, so that you may properly understand Arthur Chu’s greatness. 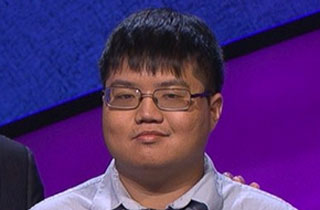 Jeopardy! may be a platform to show off how smart you are, but once there’s money involved, it will inevitably involve serious players who want serious cash. Let’s put it this way: you won’t be able to show off your vast knowledge if someone keeps buzzing in before you, winning all the clues, and not giving you an opportunity to say “Who is Ryan Gosling?” (This actually happened.)

Not intellectually goaded yet? Here’s another reason to play like a bitch: the audition process selects about 600 people out of a crowd of 100,000 people each year to play Jeopardy!. At this point, everyone is as smart as you, and everyone has about the same knowledge base as you. It’s like being the valedictorian in your high school and then suddenly finding yourself at MIT, where everyone is just as smart as you, but some people are better at doing homework, networking, going the extra mile, etc. They’re the ones who become astronauts upon graduation.

Be an astronaut and fly to the moons of Trebek. Play like a bitch. Don’t settle for the diploma. Pray that you compete against two nice old grandparents and that the categories don’t involve “Hit Songs of the 1930’s.” Read on for some bitch Jeopardy! moves.

Computer programmer Roger Craig holds the number four spot in the ranks of all-time Jeopardy champion ($230,200), and still holds the record for the single biggest one-day haul ($77,000). His secret was in his preparation, where he used a mix of Moneyball tactics, his programming skills, an online database of every single episode of Jeopardy that’s ever aired (around 6000 episodes, natch) and a memorization theory known as spaced repetition, to create the ultimate Jeopardy! preparation app.

Quantified Self described the app thusly: “He downloaded all historical Jeopardy questions and answers into a database, clustering the questions by topic and keyword, and built a web tool around it to quiz himself. He visualized his answers to see where his knowledge gaps were and help him optimize his learning.”

In non-programmer talk: it didn’t just help him memorize what he needed to know, it also helped him discover what he didn’t know and prioritized those categories.

For those of us who can’t program, well, you’re screwed, and Craig isn’t giving out copies of his program to anyone — but you can still used spaced repetition to recognize your blind spots and not spend valuable time going over American presidents, if that’s your strong suit. As Craig told NPR, “You can practice haphazardly, or you can practice efficiently. And that’s what I did.” 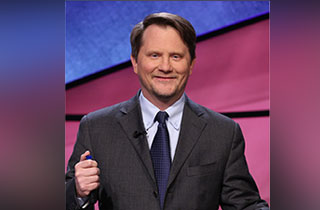 One of Chu’s strategies — and the one that pisses off home viewers the most — is his use of the “Forrest Bounce,” invented by 80’s five-time champion/Jeopardy! god Chuck Forrest, and specifically built to Fuck With Your Opponent’s Mind.

When in control of the board, the normal Jeopardy! player will usually stick to one category at a time, especially if they know it well (I OWNED “What’s On TV?”). Forrest, however, would habitually jump from category to category and call for high-answer clues, in order to confuse his competitors. As he wrote in his book Secrets of the Jeopardy Champions,, “The basic point is, you know where you’re going next and they don’t.” It has the bonus affect of making it easier to find Daily Doubles, which are nearly always hidden in the higher-value clues.

(However, to utilize the Forrest Bounce correctly, you should probably know where you’re going: during my taping, I watched another person attempt to use the Forrest Bounce three times, and couldn’t answer any of the clues. Alex gave him A Look, and it wasn’t a nice one.) 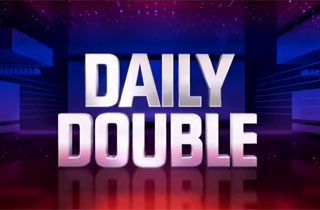 And we mean BIG, not “$2,000,” you wimp. Lots of people don’t bet big when they have this Potion of Greatness in their hands, for fear that they’ll lose everything they’ve earned. It was the reason I lost my episode, actually: I was in the lead when one of my opponents went in for a true “Daily Double” during “Double Jeopardy!,” and though he still got creamed (by me) in that round, he maintained enough of a lead to eventually win the game. (Not betting bigger in my “Double Jeopardy!” is my biggest regret to this day.) 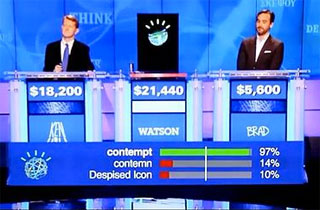 The legendary Watson match — pitting Ken Jennings and Ultimate TOC winner Brad Rutter against a powerful IBM supercomputer — proved that the only way to reliably win Jeopardy! is by being a soulless machine, made by the smartest scientists in the world, whose only purpose is to win Jeopardy!.

Ironically, Watson embodies the ideal virtues of a Jeopardy! player: it plays randomly, it teaches itself at the speed of light, it can instantly calculate ideal wagers, it’s right more often than not. Most importantly, it feels no fear, has no scruples, and doesn’t feel bad if it’s playing against a sweet-faced Mormon man.

— —
>> Tina Nguyen is an editor at Mediaite who is glad she has a career and an unfairly light student loan burden. Follow her (@Tina_Nguyen) on Twitter