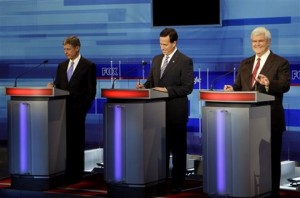 It’s possible that the acoustics in the room were just that weird, but it seems more likely that one of these guys made a calculation about the usefulness of defending a gay soldier, versus alienating the people doing the booing.

Former New Mexico Gov. Gary Johnson came out of nowhere to become the star of Thursday night’s debate, but his interview with Sharpton could send him back to Republican primary oblivion, as he refused to make excuses for the ugliness on display at several of this cycle’s debates. Asked an unrelated question by Sharpton, whether  he was disappointed with the tone of some of his opponents, Johnson volunteered his feelings about the audience’s behavior at Thursday night’s debate.

“The booing that occurred last night at the event is not the Republican Party that I belong to,” Johnson began, and said that he “was chomping at the bit to be able to respond to that.”

Johnson said he regretted “not putting my fist down and pounding it” due to his outsider status, but  wished he had stood up and said, “you know, you’re booing a US serviceman who’s denied being able to express his sexual preference? That’s not right. That’s not right and there’s something very, very wrong with that and when it came to Don’t Ask, Don’t Tell, I think we should’ve repealed that a long time ago.”

Sharpton then followed up by asking about Republican audiences cheering for things like executions and letting uninsured people die, and Johnson, making no excuses for the debate crowds, agreed with him that “this stuff is ugly to the American public.”

“I don’t think there’s any question that we put innocent people to death,” Johnson said, “and I’m not in the camp that wants to punish or put to death one innocent person to put to death 99 that are.”

“And talking about health care and ‘let him die?’ No, that’s not this country. We’re a country of compassion.”

Whatever bump Johnson might have gotten from the debate will surely be blunted by all this talk of “compassion” and “sanity,” neither of which are particular selling points with this year’s conservative base. Perhaps Johnson can take solace in the possibility that not too many conservatives watch Al Sharpton’s show.