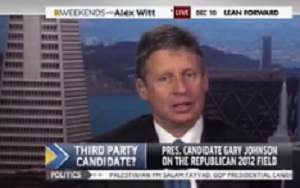 Fourth-tier GOP presidential candidate and one-time debate sensation Gary Johnson became the latest to level a “serial hypocrisy” attack at frontrunner Newt Gingrich over the weekend, telling MSNBC’s Alex Witt that in 1997, Gingrich “proposed the death penalty for marijuana — for possession of marijuana above a certain quantity of marijuana, and yet he is among 100 million americans who smoke marijuana.”

While Alex Witt didn’t think Gingrich’s herbal history would be “at the forefront,” maybe it should.

Johnson later referenced Gingrich’s marijuana use in the past tense, saying that he “would love to have a discussion with (Gingrich) on the fact that he smoked pot, and under the wrong set of circumstances, he proposed the death penalty for something, potentially, that he had committed?”

Gingrich, you may be surprised to learn, admitted to youthful marijuana use, and according to Reason magazine, was sort of ahead of his time:

Gingrich had this to say about his illegal drug use: “That was a sign we were alive and in graduate school in that era.” Somehow, an activity that was no big deal in the late ‘60s and early ‘70s had become shameful and scandalous by the late ‘80s.

Although Gingrich excuses his illegal drug use by implying that most of his fellow students also smoked pot, marijuana use was probably less common when he was in graduate school than it was in 1988. The government’s survey data don’t go back to 1971, when Gingrich got his Ph.D. But the survey shows a steady rise in drug use from 1974 until 1979. Although reported drug use declined after that, in 1988 it was still considerably higher than in 1974.

He was also an early proponent of legalized medical marijuana, penning a passionate, eloquent letter for the Journal of the American Medical Association in 1982.

In the intervening years, however, Gingrich’s attitudes toward marijuana, like so many of his positions, changed significantly, and while the years in this case might insulate him from the flip-flopping charge, he displays a moral flexibility that should disturb conservative voters. “See, when I smoked pot it was illegal,” he told WSJ’s Hilary Stout in 1996, “but not immoral. Now, it is illegal AND immoral. The law didn’t change, only the morality… That’s why you get to go to jail and I don’t.”

This suggests not that Gingrich’s moral attitudes changed over time, or that the nation’s did, but that right and wrong themselves are subject to change, a sort of moral relativism on steroids (which might become moral any day now).

Johnson’s statement about Gingrich’s support for the death penalty is somewhat misleading. He conflates Gingrich’s personal use of marijuana with the amount of pot that a smuggler or a dealer might have. Still, under Gingrich’s proposed law, you could be put to death for possession of as little as 200 joints, which is equal in volume to a carton of cigarettes.

Inconsistency aside (Gingrich is, as far as I know, the only politician in history to be on both sides of the poem Whitey On The Moon), the former House Speaker might actually see some benefit from his extreme harshing of the collective mellow. In a general election, putting small-time pot smugglers to death might not play so well, but Republican audiences eat up the Death Penalty like bacon-laced Chex Mix.

Here’s the clip, from MSNBC’s Weekends With Alex Witt: