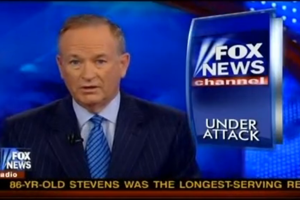 Bill O’Reilly may have taken a back seat to others on his network on the ideological front, but when it comes to defending Fox News from criticism, the Factor is the place to be. Last night, O’Reilly, with Fox Business Network’s Charlie Gasparino, took on new attacks from Variety and NBC, but O’Reilly emphasized this time that the fight he saw against Fox News wasn’t limited to ideological grounds or those of ratings– it’s a money issue, plain an simple.

Variety, O’Reilly noted, had attacked Fox News “more than one hundred times.” Part of that he saw as ideological. Part of it was financial. And, especially in the case of NBC, he argued– which is making less money now than three years ago– it’s about money. So why was Gasparino O’Reilly’s guest tonight? Gasparino used to work at NBC, and he’s not shy about talking about his former employer. Discussing the atmosphere at NBC, Gasparino noted that “the people you work with every day do have an agenda” and that, many times, “they will not be fair.”

To illustrate how the ideological slant he blames for the attacks on Fox News function in practice, Gasparino told an anecdote that he claimed CNBC “will deny”: apparently, at the beginning of President Obama’s term, GE head Jeffrey Immelt called a meeting to make sure people on the network “were being fair to the president.” Or, as O’Reilly put it, “directly intervened with the editorial position of the network.”

Video from last night’s segment below: