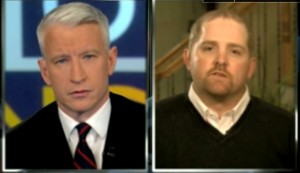 When Arkansas school board member Clint McCance took to his Facebook profile to opine, “I enjoy the fact that [gay people] often give each other aids and die,” he probably had no idea how much trouble he’d be in. Like a bad student called into the principal’s office, a sullen McCance showed up onto Anderson Cooper‘s show to explain his many offensive comments. “I’m a big enough man to admit when I say something wrong,” McCance said, moments before he told Cooper that he planned to resign from the school board.

McCance, ever selfless, went on:

I am going to resign from the school board. It is to help my community, to help my school. I don’t want them to receive bad press or have a distraction because of the ignorant comments that I made.

Those words should provide a little (though not much) comfort to anyone who had to read these words from his Facebook page:

They want me to wear purple because five queers committed suicide. The only way I’m wearing for them is if they all commit suicide. I can’t believe the people of this world have gotten this stupid. … I like that fags can’t procreate. I also enjoy that they often give each other AIDS and die…I would disown my kids they were gay.

But apparently a lot has changed for him in the last week; he told Cooper, “I would never support suicide of any kids. I don’t support bullying of any kids.” Watch McCance change his tune in the Anderson Cooper 360 clip below.