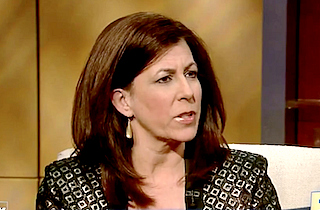 Conservative radio host and openly-gay Tammy Bruce said of Fox & Friends Thursday morning that the gay rights movement risked turning into fascist bullies in its response to Indiana’s new RFRA law, as embodied by the threats against an Indiana pizzeria that told a local news station it would not cater a gay wedding.

“For me to turn around in the 21st century and see that this is what we were fighting for, so we could condemn people who are different, and with whom we disagree is the antithesis of what every civil rights movement was about.”

After the interview with the owners aired, Memories Pizzeria became the focal point of the debate over the state’s new law, drawing critiques and trolly Yelp reviews, but also threats that it said forced its closure.

“I think when you see a mob operating, there is fear, and you tend to retreat,” Bruce added. “We saw this with Chick-Fil-A. Everyone came to their defense when they were under attack by fascists, by bullies. The gay liberals have turned into bullies, when our work is to stop that kind of behavior.”