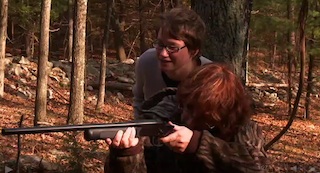 Glenn Beck has been in the news quite a bit the past few days but, no matter how many media fights he gets in, the real story for him continues to be the development of his network GBTV. It’s been interesting to see the different shows the network has produced and how closely they adhere to the Beck brand. For example, the political comedy show, The B.S. of A., has had some jokes that seem like they fit the big boss’ ideology (like this funny communist game show bit) while other segments make it clear that, as Brian Sack promised, the show’s its own thing. So, some might be asking when GBTV is going to produce a show that really feels like a Glenn Beck show. Where’s the piece of television that completely embodies everything he represents and distills it into a narrative chunk?

Well, how about a reality series about an American family heading off into the woods to learn how to use guns so as to prepare for some kind of vaguely defined apocalypse? Oh my God, yes.

The absolute Beck-gasm I just described is apparently a real thing. It’s called Independence USA and it’s premiering in January. I’ll let the GBTV press release give you a description:

“Concerned that the economy could collapse? Or that a natural disaster could wipe out our infrastructure? So is Frank, and he is doing something about it! Believing that America has become too reliant on a crumbling foundation, Frank is preparing his family for life “off the grid,” admiring the way people lived in the 19th century. Like them, he longs to become completely independent. So he is embarking on one project at a time hoping to prepare his family for the worst, such as building a car that runs on wood in case gasoline supplies are interrupted, becoming expert hunters when grocery stores are no longer in existence, and making his own alcohol for barter when the dollar collapses. Frank does it all with determination, intelligence, and good humor. He’ll need all that and more, as he attempts to motivate a family that neither shares his fervor nor wishes to sacrifice the comforts and conveniences of 21st century life. In the series premiere- ‘A Hunting We Will Go’- we meet the Belcastro’s as they set out on a journey to be a self-sufficient family. Frank wants the family to be able to hunt and kill their own food but not every one is on board. Starting with making their own weapons Frank and his son Adam really learn an appreciation for the hunt but wonder if they will succeed.”

Holy crap, Glenn Beck made a show about a family making their own alcohol in the woods. This is too good to be true. Don’t believe me? Just look at this title card from the newly released trailer: 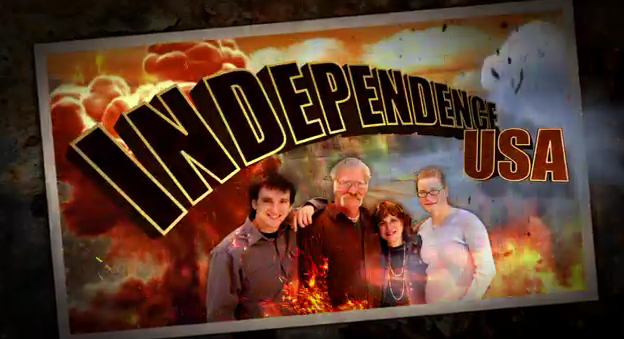 Just look at that. LOOK AT IT! It’s an American family engulfed in flames for no reason. It’s beautiful. This thing is like Sarah Palin’s Alaska on crack. Crack that it made itself because it’s independent.

Watch the trailer from GBTV below: