‘Genuine’ Or ‘A Joke?’ Fox News’ The Five Takes On Obama’s ‘Charm Offensive’ With Republicans
VIDEO

‘Genuine’ Or ‘A Joke?’ Fox News’ The Five Takes On Obama’s ‘Charm Offensive’ With Republicans 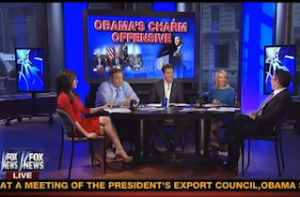 Fox News’ The Five opened its Tuesday afternoon show by looking at a quote from an unnamed White House official that popped up in a National Journal article about President Obama‘s recent outreach effort. “This is a joke. We’re wasting the president’s time and ours,” the source said. “I hope you all (in the media) are happy because we’re doing it for you.”

Dana Perino kicked off the conversation, calling the quote “very revealing.” She explained that if you’re just “casually” watching the news, it appears that the president is actively reaching out to Congress in a way he hasn’t done before. But, she asked the panel, “Do you think that a quote like that completely undermines everything [the administration has] tried to do in the past two weeks?”

Andrea Tantaros pushed the idea further, saying that anyone who follows politics is likely “skeptical” about the president reaching out to Republicans and suggested that his only goal is the take back the House of Representatives for the Democrats in 2014. She said that Obama might think people watching his actions think he’s “genuine,” but she and other politically savvy watchers know better.

From the liberal perspective, Bob Beckel essentially said that whether Obama is being “genuine” or not, “Republicans will have a very difficult time saying the president of the United States did not consult with us.” He added that, at the end of the day the president will be able to say “I tried my best.”

Greg Gutfeld may have reflected what many viewers were thinking when he said, “I don’t think this matters to anyone outside our buildings on Sixth Avenue.” He said he believes the real problem lies in Americans’ lack of education on economics. “Forget ‘where do babies come from?’ We need classes on ‘where does money come from?’ And it’s not your daddy’s wallet.”

Let us know what you think of President Obama’s “charm offensive” by answering the poll below: