George Lopez On Working With Conan: “These Shows Will Change Late-Night TV” 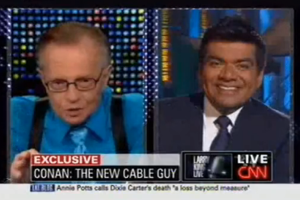 George Lopez paid Larry King a visit last night to chat about his new colleague, Conan O’Brien, and how he could not be happier welcoming O’Brien to TBS, even if it meant him moving up to midnight to make room. The main theme of the conversation, Lopez wanted something to be extremely clear about that move: O’Brien “did not want me to get Leno’d.”

Lopez continued to sell his partnership with O’Brien as he did on his program last night— a “same-sex Lucy and Ricky” that will “change late-night TV”– and noted that the network will try to keep O’Brien in California so that it would be easier for him to interact with Lopez, maybe even having one host visit the other’s set occasionally. This was particularly exciting to Lopez, who noted that he believed “the system of the network talk show is a little bit outdated.”

Lopez confirms most reports of the negotiations involving him between his company and O’Brien: he was approached by a network executive and asked his opinion about the move and, when giving the affirmative, was asked to call O’Brien and confirm with him that the move was ok. According to Lopez, there were only two things O’Brien was after: “the freedom of doing a show that was edgy,” and the certainty that “he wasn’t going to do to [Lopez] what was done to him.”

As for what the change meant to Lopez’s immediate life, he joked: “my profile has changed in a day– no longer do I get confused for being Erik Estrada.”