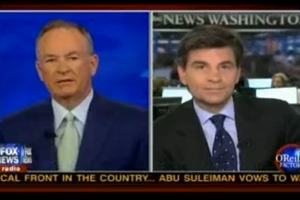 Last night, Bill O’Reilly welcomed a surprising cross-network guest on the show to talk about the Obama administration: ABC News’ George Stephanopoulos. The two found common ground discussing the response to the Gulf oil spill, but when O’Reilly presented Stephanopoulos his theory that Secretary of State Hillary Clinton is gearing up for a run against President Obama in 2012, his only response was a deadpanned “you’re not serious.”

On the disaster in the Gulf of Mexico, Stephanopoulos agreed that federal agencies had not been doing the proper environmental oversight over BP and other oil companies and that the disaster happened on President Obama’s watch, though the agencies had been problematic for a while. The more interesting debate came during their second subject: is Hillary Clinton ready to stage a coup?

Fox News contributor Dick Morris had proposed precisely this earlier during the week as a response to an interview where Clinton argued that the problems with the American economy were making her job harder. As aforementioned, Stephanopoulos, mouth slightly agape, could not quite believe the theory, laughed it off, and wondered how Clinton could possibly convince anyone that she was deserving of being president if she suddenly turned around and challenged her boss for the job. “I don’t see any possibility, zero, if you could say less than zero, none at all” of her running, he argued, and contradicted Morris’ claim that she rarely goes off-script by pointing out that she got into trouble recently for saying something off-the-cuff. Asked how Clinton would put together a platform at all, O’Reilly spoke, as Clinton: “I did a heckuva job, Brownie, overseas and my approval rating is 65%, and this guy screwed up everything else and his approval is 30%, so I’m going to challenge him in the primary.”