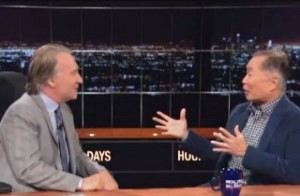 One of the saddest facts about the original Star Trek cast is that actors George Takei (Hikaru Sulu) and William Shatner (Cpt. James T. Kirk) can’t stand each other in real life. No matter how many times Trekkies hear about the feud, it never seems to feel right or make sense.

During his appearance on HBO’s Real Time, Takei was grilled by Bill Maher on that never-ending feud that reminds millions of Americans of the time members of their favorite band didn’t get along. “You just want to go, ‘Come on, Bee Gees, just get along!'” the host joked.

“Well, we’re human,” Takei explained, with Maher expressing confusion that someone from our northern neighboring country couldn’t get along with someone else.

“Canadians have a certain image of being even-tempered and friendly and all that,” Takei continued. “Well, he is a person who is that way with himself. He is very self-centered.”

After a hearty laugh, the geek celebrity-turned-Internet-sensation said, “We work together. We’re professionals. We get the work done, but, it’s with a lot of difficulty.” He joked with Maher that the temptation is sometimes there to just “drive the starship into a death star” just to spite Shatner (weird mix of geek references, eh?).

The feud came up again when Takei talked about how his cast-mates all knew was gay except for one. “It went right over his head.” The obvious answer: William Shatner.