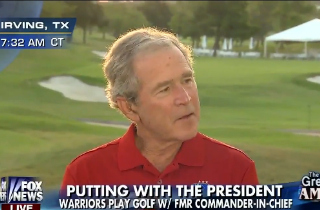 In an interview with Fox & Friends host Brian Kilmeade, former President George W. Bush addressed his brother Jeb‘s chances of running for president in 2016. And in a very rare journalistic occurrence, Kilmeade was not the one who brought up the question. It was the former president himself who brought it up.

Bush agreed with Kilmeade that being a governor is a good “prerequisite” to becoming president and establishes the proper skill set.

He even went as far as to say that his brother “wants” to be president.

“He understands what it’s like to be president for not only the person, or serving, plus family,” Bush said. “He’s seen his dad, he’s seen his brother, and so he’s a very thoughtful man and he’s weighing his options.”

It is worth noting once again that President Bush brought up the topic of his brother running for president, and was not prompted by a question about it from the interviewer. It is extremely rare for former presidents to speculate about electoral politics.