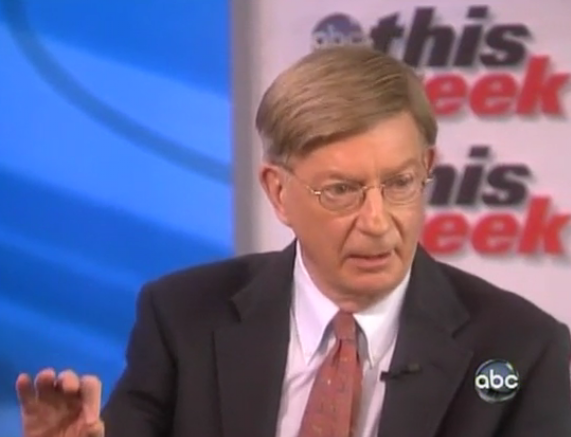 George Will really doesn’t like Newt Gingrich. On the This Week round table this morning, Will began his comments on Gingrich, now a frontrunner, by stating that his candidate “embodies everything disagreeable about modern Washington,” going on to laugh at the idea that Gingrich was hired by Freddie Mac as a “historian,” and, as a final blow, speaking more glowingly of even Rep. Ron Paul than of Gingrich.

RELATED: Paul Krugman: Newt Gingrich Is ‘A Stupid Man’s Idea Of What A Smart Person Sounds Like’

Gingrich took a lot of bashing this morning, but mostly from familiar sources (Paul Krugman later on in the program commented that Gingrich was merely “a stupid person’s idea of what a smart person sounds like,” which is accurate if not somewhat projecting on Krugman’s part). But from Will, the barbs seemed even sharper. “It is an amazingly efficient candidacy in that in embodies everything disagreeable about modern Washington,” he began, arguing that his “colorful personal life” was actually the better part of his record, since he still supported ethanol subsidies, the types of programs from which the Solyndra scandals blossomed, and shrugged away the Freddie Mac scandal with a claim that he was a “historian.” “He’s not a historian!” Will noted derisively.

Turning to Gingrich’s comments that he was not a lobbyist for Freddie Mac, host Christiane Amanpour asked whether such damage control had a chance of working. The rest of the panel– Peggy Noonan and Matthew Dowd— seemed skeptical at best, though Noonan felt compelled to defend Gingrich after, in another attack, Will held Gingrich’s “absurd rhetorical grandiosity” against him.” “The base of the Republican Party doesn’t like Newt,” was the best she could muster as a defense, “and that’s a big plus.”

RELATED: Heilemann To Matthews: If I Were Romney, ‘I Would Be Suicidal’ Over Gingrich Lead

The panel then agreed that Rep. Paul had a decent shot at Iowa, which would be incredibly unsettling to the GOP field. Interestingly, Will gives even more credit to Paul than to Gingrich, noting that it was possible for him to take a primary and, moreover, should he choose to run as a third party candidate, could seriously impact the general election.