George Will: Occupy Wall Street Represents The Spirit And Intellect Of The American Left 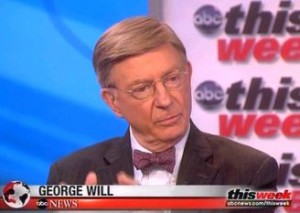 On This Week today, George Will argued that the Occupy Wall Street protestors should be highlighted by the media and the Republicans should embrace it because the general rowdiness of the protestors, in his view, represents “the spirit and intellect of the American left.”

Christiane Amanpour reported on the Wall Street protests, which have inspired similar protests all around the country, from Occupy Chicago to Occupy DC, and asked Will if he thought it was fair to compare the group to the Tea Party, given their similar outrage at the bailouts of large financial institutions. Will completely dismissed the comparison, arguing that the Tea Party was more politically savvy and focused on trying to win elections rather than just protesting.

Will then expressed his disagreement with many other Republicans that the protests should not be getting the kind of coverage they are from the mainstream media.

“I wish for the Occupy Wall Street demonstrators a long life and ample publicity, for two reasons. I think they do represent the spirit and intellect of the American left, but also I remember the 1960s. We had four years of demonstrations like this leading up to 1968, when the Nixon-Wallace vote was 57 percent, the country reacting against the demonstrators and the Republicans went on to win five of the next six presidential elections.”

RELATED: Rep. Peter King: ‘We Have To Be Careful Not To Allow [Occupy Wall Street] To Get Any Legitimacy’

Donna Brazile disagreed with the 1960s comparison, arguing it represents “a different movement.” She didn’t like the idea of it being similar to the Tea Party either, but believed it organically developed after the partisan debt ceiling debate that frustrated many Americans at the ineptitude of Washington politics.