George Will: ‘Quite Literally, The Opposition To Gay Marriage Is Dying’ 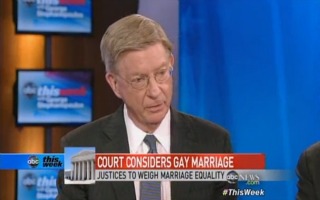 Conservative commentator George Will told George Stephanopoulos on ABC’s This Week Sunday that political hostility toward same-sex marriage in America is diminishing: “Quite literally, the opposition to gay marriage is dying.”

Stephanopoulos asked panelists how they believed the Supreme Court would rule on two separate gay marriage cases it agreed to hear this week. One of the cases examines California’s Prop 8, which bans same-sex marriage in the state, and by examining this law, the court can determine whether gay marriage is a right under the U.S. constitution. Will said he believed it was possible SCOTUS would say “it’s not necessary for us to go here,” because it’s being decided amongst the states, but according to him, it was more likely that they would endorse gay marriage. Will went on,

“On the other hand, they could say, ‘this is now safe to look at this, because there is something like an emerging consensus.”

Will implied that it’s older Americans who mostly oppose gay marriage and as they pass, so does the opposition. Stephanopoulos shared a poll indicating that approval of same-sex marriage is increasing across the nation and James Carville, another panelist, told him he thought Will’s logic was “absolutely correct.” Even Mary Matalin, conservative political consultant, agreed with Will and Carville, saying it makes sense for the Supreme Court to endorse gay marriage in the face of changing public opinion because, “Americans have common sense.”