George Will Slams Obama On ABC: ‘Reluctant President’ Waited Too Long To Respond To Syria Bloodshed 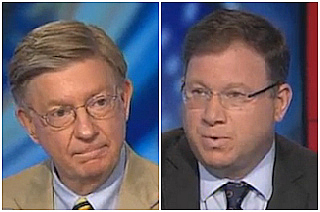 “Now he’s wrong,” George Will said on ABC’s This Week, following up on his op-ed from several weeks ago arguing Obama was right on Syria.

“Napoleon said, ‘If you start to take Vienna, take Vienna,'” Will said. “That is, don’t be tentative, whatever else you do, and don’t be tardy. General McArthur said every military debacle can be explained by two words: Too late. Too late to discern the threat, to prepare for the threat, to respond to the threat.”

“This intervention in another nation’s civil war with sectarian overlays and ethnic complications was announced not by the president, not in conjunction with Congress, but by the deputy national security adviser,” Will said. “This is obviously a reluctant president who now has himself in a competition with the Russians who are all in supporting the other side.

“The president said Assad lacks legitimacy, and Assad must go. So the negotiations are to negotiate Assad’s departure from power? I don’t think he’s interested.

“This is the worst of all possible worlds,” Atlantic writer Jeffrey Goldberg said. “This is dipping a toe in. This is signaling that we’re in, but we’re not really in.”

“No one believes, including the president, I believe, no one believes the small arms are going to change the balance of the war,” Goldberg continued. “I don’t think the Iranians are siting there saying, oh look the Americans are sending eight trucks of small weapons to the rebels, we better give up.”

“We’re now in the position to intervene in what has become a Hezbollah-al-Qaida war. I don’t know the answer of who do you support in that. I think neither.”

“The president is not hesitant to order military forces into harm’s way,” Bash said. “He did it in Afghanistan, he did it in Libya, and he did it deep into Afghanistan to get Osama bin Laden.”

“But he has been reluctant on this,” guest-host Jonathan Karl said.

“He has been careful.”