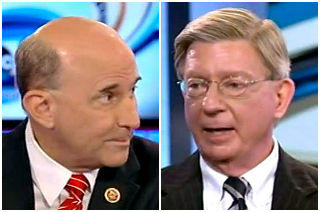 Appearing on This Week With George Stephanopoulos, Republican Congressman Louie Gohmert battled not only the Democratic panelists but also conservative pundit George Will over the wisdom of shutting down the government to prevent Obamacare funding.

Will reminded Gohmert that however much the congressman disliked Obamacare, the GOP’s power to stop it was limited.

“The fact is the president has the power, particularly when supported as this one is by the mainstream media, to set the narrative,” Will said. “The narrative will be that the Republicans have chosen simply to cause chaos. It’s a bad idea…You cannot govern this country from one-half of one of our three branches of government. Can’t be done.”

“Even though we’re one-half of the legislating body from which no spending occurs unless we agree, that is a position that allows us to force others to adhere to the Constitution,” Gohmert replied. “We don’t have to wait for the Supreme Court. We can force that. And we can say, ‘You’re going to abide by the Constitution whether the Supreme Court gets it wrong or right.’ We have the ability to force respect for the law. And some of us think that we ought to force them to do that.”