George Will: The Republican Party Has Become Too Southern
video

George Will: The Republican Party Has Become Too Southern 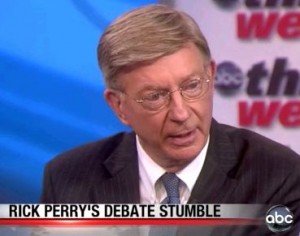 George Will criticized Rick Perry‘s debate performance last week on This Week today, while also criticizing the Republican party for adopting a Southern strategy in the last few election cycles that have not always yielded positive results.

Christiane Amanpour, while not wanting to pile on to the Perry criticism, wanted to address his unfortunate stumbling during last Thursday’s Fox News debate. You’ll recall that Perry slightly mangled his words when going after the many flip-flops of Mitt Romney.

Will agreed that the soundbite was painful, and postulated that it is now too late for the GOP field to be shaken up, and the voters will be presented with the choices they already have. But Will didn’t just criticize Perry, he criticized what his candidacy meant for the Republican party.

“Tim Pawlenty got in trouble when he got a chance to attack Romney and didn’t. Perry’s in trouble because he attacked Romney and did it so incompetently. There’s also the problem that the Republican party has been, in recent years, too Southern. In the last five presidential cycles, they’ve got 79 percent of their electoral votes from the South. It’s too much.”

He argued that the Republicans have relied too much on picking up the Southern and Northwestern states (as well as funneling a lot of money into winning Ohio) to take the presidency, and such a strategy might not work this time around because of how President Obama changed the battlefield.