George Will: Times Sq. Bomber Proof Of ‘Decline Of Tradecraft Of Terrorism’
video

George Will: Times Sq. Bomber Proof Of ‘Decline Of Tradecraft Of Terrorism’ 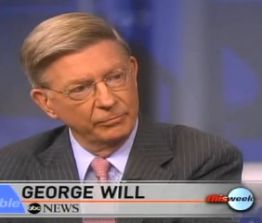 Broadly speaking, reaction to Faisal Shahzad’s attempt to car bomb Times Sq. appears to fall into two camps: The Eric Holder “this proves there is a constant threat and the terrorists want to do us lethal harm and we need to be on constant alert” camp, and the slightly more laissez-faire “Shahzad was an idiot who locked both his getaway AND his house keys in the van he was trying to blow up, and we got lucky…again” camp. George Will definitely belongs to the latter. Here’s what Will had to say about Shahzad this morning on This Week.

The Pakistan connection, if true, is good news in the sense that it indicates the decline of the tradecraft of terrorism over time. The underwear bomber at Christmas and this man, also, are staggeringly incompetent and minor league figures compared to the amazing precision and scale of the 9/11 attacks.

Probably credit goes to both the Bush and the Obama administration for the extraordinary pressure with the drone attacks and all the rest that are being put on the Taliban and other supporters who are now footloose and having trouble coordinating.

The bad news — if there is bad news in this — is the targeting of Times Square. Let me tell you a story. Right after 9/11, I asked Jack Valenti, the late Jack Valenti, then chairman of the motion picture association, if he worried that someone might target Universal Studios as a symbol of Western decadence. He said, no, what worries me is six backpack bombs in six cineplexes around the country on a Saturday night. That would put huge economic damage on the movie industry. The question is, have they begun to figure that out?

All things considered, I think that’s what you might call a level-headed reaction. On a related note: I did not hear one mention this morning of Frank Rich’s op-ed piece accusing the media of ignoring the Times Sq. bomb news story whilst flooding the airwaves with WHCD party coverage. Video of Will below.