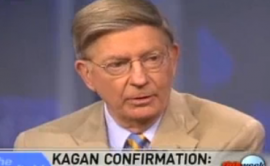 George Will came to Elena Kagan’s defense on This Week today…sort of. During a a roundtable discussion about the possible challenges Elena Kagan’s confirmation might face Will spoke out against the prevailing issue the right has with Kagan, namely her restriction of military recruiters on the Harvard campus when she was dean of the law school there. Said Will:

It is unfair to say that she kicked the military off Harvard’s campus. Harvard did that.

Don’t worry, Will drops a second shoe here. But first, just to be clear about what he means when he says “Harvard did that” let’s skip ahead to Glenn Greenwald, who notes:

This Don’t Ask, Don’t Tell controversy is a complete side show to the real questions that are — that should be asked. Because many universities have as a policy that they don’t allow employers onto campus and use resources to recruit who can’t certify that they refrain from discriminating against some of the university students. And that was the general policy that Dean Kagan applied in that instance. It was a perfectly appropriate thing to do.

So there’s that. But as Will points out, it’s not military policy she’s objecting to, it’s the “law of the land”:

It is as unfair for her to say, as she repeatedly has done, that this is the military policy that she’s objecting to. She’s objecting to the law of the United States, passed by a Democratic Congress and signed by a Democratic president in 1993. Eighteen currently sitting Democratic senators voted for Don’t Ask, Don’t Tell, including Harry Reid, John Kerry, Mr. Leahy, who is here today, and no longer a senator, the vice president, Joe Biden.

And that is the sticking point (if there is actually going to be a sticking point). In her move to bar military recruiters Kagan was ostensibly objecting to a what could be considered a non-partisan federal law. I doubt any of this is going to hinder her confirmation much — as a number of people pointed out this Sunday, she can refrain to answer questions on topics she might later have to rule on — but between DADT and Andrew Sullivan it looks likely that we are headed to some sort of national conversation about Gay rights. Video below