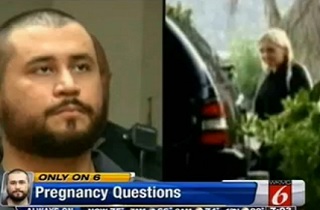 Since George Zimmerman‘s arrest on domestic violence charges, details continue to emerge about his relationship with 27 year-old Samantha Scheibe, the girlfriend who called police on Zimmerman Monday, and who had apparently been talking to reporters for weeks beforehand. WKMG Orlando reporter Eric Sandoval reports one particularly disturbing allegation, that Zimmerman texted “a still image from an intimate home video of Scheibe and Zimmerman” to Scheibe’s young daughter.

According to Sandoval, Samantha Scheibe and her mother, Hope Mason, have been in touch with him for several weeks, long before Monday’s arrest thrust Zimmerman back into the national spotlight.

“Scheibe and her mother, Hope Mason, spoke with Local 6 on and off through text messages and phone calls over the past three weeks as they talked about participating in an on camera interview about Scheibe’s relationship with Zimmerman,” Sandoval reports, but was first seeking a national interview. “Mason said she hoped by Scheibe doing the interview, she would force Zimmerman to get help – and the attention would keep Scheibe safe,” Sandoval reported.

“Just last Thursday, Mason was still seeking a national interview. But this time she was promising both George Zimmerman and Samantha Scheibe.”

Sandoval confirmed, in an email to Mediaite, that Scheibe and Mason “tell me they will not appear on camera without being paid… period.”

In addition to describing a volatile relationship, Schiebe told Sandoval about the image she says Zimmerman sent to her daughter. “They took intimate videos of themselves she says. When things went sour, she says Zimmerman took a still shot of one of those videos, and texted it to her young daughter.”

Scheibe and Mason also took pains to dispel the notion that the relationship was the result of fame-seeking, or that the incident Monday was a setup.

In a later report, Sandoval said that he asked Scheibe’s mother, after the incident on Monday, whether her daughter was actually pregnant. “I asked on Monday, night when all this is was breaking,” Sandoval said, “and she laughed at me and said ‘No comment.'”

He later added that “Scheibe’s mother told Inside Edition she was not pregnant on Monday, and she miscarried months ago.”

Sandoval said that he spoke with Mason after his first report aired, and that “She really didn’t seem to have a problem with any of the facts that I reported. The only thing she says that she was worried about is being perceived as setting up Zimmerman for what happened on Monday. She told me the interviews they were seeking and the argument were purely coincidental.”

Here’s video of that report, from WKMG: