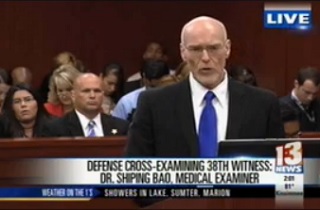 Following powerful testimony by slain teenager Trayvon Martin‘s mother, Sybrina Fulton, and Trayvon’s brother, Jahvaris Fulton, the prosecutors in the George Zimmerman murder trial wound up their case with Associate Medical Examiner Shiping Bao. Defense attorney Don West took every opportunity to put distance between the heartrending testimony of Trayvon’s relatives, and the beginning of the defense case, attacking Dr. Bao’s trial preparations at length, but really earned his pay by very effectively subverting Judge Debra Nelson‘s ruling that results of the autopsy’s toxicology report could not be admitted into evidence.

Political observers may remember Hillary Clinton campaign adviser Mark Penn bragging about not bringing up cocaine by repeatedly saying “cocaine.” What defense attorney Don West did in court Friday afternoon was like that, only much more effective. In a hearing outside the presence of the jury, Judge Nelson ruled that Dr. Bao’s testimony about Trayvon Martin’s toxicology report could not be admitted into evidence, because its probative value was outweighed by its potential to prejudice the jury. In other words, the presence of THC in Martin’s blood could make the victim look bad in the eyes of the jury, without having sufficient relevance to the case.

Moments after that ruling, however, West began to drop the word “toxicology” into his questions as if he were trying to win a drinking game. “Did you do a blood draw for routine toxicology in this case?” West asked.

“We try to draw blood for every case,” Dr. Bao replied.

“In this case, there was blood drawn as part of the routine autopsy protocol, for submission to a toxicology lab for analysis, is that correct?” West asked. That’s twice he brought up toxicology.

What West is doing is hammering, for the jury, the fact that a toxicology report was prepared, which could later cause them to draw conclusions about why that report was not in evidence. The prosecutor’s objection, ironically, only heightened that effect.

Judge Nelson asked West to abide by the court’s ruling, to which West replied, “Of course, your honor,” then turned to the witness and continued. “For the toxicology purposes, the blood was drawn from the chest area, correct?”

After West referenced “toxicology” two more times, Judge Nelson called the attorneys up for a sidebar, likely to reinforce the ruling she’d made outside the presence of the jury. Following that sidebar, West was back at it. “The blood drawn for toxicology purposes in this case, you are saying, was not available through a peripheral source?” he asked, then shortly followed up by asking “In this case, who drew the blood submitted as part of the toxicology?”

The prosecution objected again, and Judge Nelson explained that “The court has made a pretrial determination, and I’m asking counsel to make sure you abide by that.”

There’s a saying in court that you can’t un-ring a bell, but this was more a case of the defense banging a gong, and the judge banging it louder. Whatever conclusions the jury might have drawn from the presence of a little THC couldn’t possibly compare with the mystery contents of the Forbidden Toxicology Report. As cleverly as West played this, the prosecutor and Judge Nelson allowed it to go on for far too long.

Here’s the clip, from Orlando’s Channel 13: