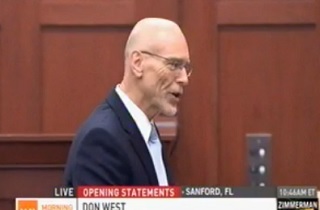 With friends like these, who needs enemies? The George Zimmerman murder trial began Monday morning with a powerful opening argument by prosecutor John Guy that included a gut-wrenching account of 17 year-old Trayvon Martin‘s final moments of life. For some reason, the defense elected to have the argument that “there are no monsters” in this case made by a guy who looks and sounds like Voldemort’s undertaker, and then had him segue into the facts of the case by telling a knock-knock joke so deadly, even Florida wouldn’t issue a permit for it.

Zimmerman defense attorney Don West began his opening argument by trying to defuse the emotional impact of Guy’s opening, agreeing that “this is a sad case,” but then also ham-fistedly conceding permission for the slain teenager’s parents to grieve. “Sabrina Fulton and Tracy Martin are grieving parents, without question,” he said, adding “They have the right to grieve, they have the right to feel the way they feel.”

He then went into a long digression about why George Zimmerman’s family members were not seated in the courtroom , culminating in an objection that was sustained from the bench.

“Well, I think the evidence will show that this is a sad case, that there are no monsters here,” West continued. “Sometimes you have to laugh to keep from crying. So let me, at considerable risk, let me say, I’d like to tell you a little joke. I know how that may sound a bit weird, in this context, under these circumstances, but I think you’re the perfect audience for it. As long as you don’t, if you don’t like it, or you don’t think it’s funny or appropriate, that you don’t hold it against Mr. Zimmerman, you can hold it against me, but not Mr. Zimmerman.”

Yes, Mr. West, it is really weird, really really weird. Maybe the strategy here is to gain sympathy for the defendant because his lawyers suck so bad?

George Zimmerman just shot and killed your unarmed, 17 year-old son? Because that’s pretty much the punchline that Trayvon’s parents were told when they got a knock on the door in February.

The joke was met with complete, life-sucking silence in the courtroom. “Nothing?” West pleaded, to a tiny smattering of embarrassed titters. “That’s funny.”

John Guy’s opening was powerful in substance, but also in style, so Zimmerman’s defense team already had an uphill battle. Telling any joke, after an argument like that, is a silly risk, but telling a horrible, older-than-dirt’s-uncle joke that also evokes the dreaded knock on the door following such a tragedy, that’s almost malpractice.

Here’s the clip, from Orlando’s Channel 13: