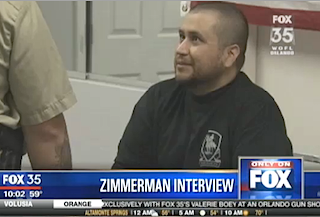 George Zimmerman, who was acquitted last summer in the shooting death of 17-year-old Trayvon Martin, spent this weekend signing autographs as part of the New Orlando Gun Show. When a reporter from Orlando’s Fox 35 asked him if he understands why this might make some people angry, he replied, “No, I don’t.”

Zimmerman said he decided to appear at the event to show his gratitude some everyone who stuck by him during the lengthy trial and meet his supporters in person. “The concept of being able to pay them back for what they did for me and seeing my supporters face to face was something I just couldn’t pass up,” he said, adding that he has no plans to keep a low profile in the aftermath of the immense media coverage the trial received.

He went on to say he realizes that everything he does is “hyper-scrutinized” by the media and the public, including a speeding ticket he received last fall, and tries to stay aware of that as he conducts his life.

Zimmerman was originally supposed to appear on the main grounds of the gun show, but was forced to relocate to a smaller venue off-site after the general manager of the Majestic Event Center where it was being held informed him that he would not be permitted on the property. In a tweet directed at Fox News’ Megyn Kelly, Zimmerman called it “another company bowing to threats of being labeled racist.”

. @megynkelly another company bowing to threats of being labeled racist. Americans, give them your opinion. pic.twitter.com/SsTU1f1n65

Watch video below, via Fox 35: