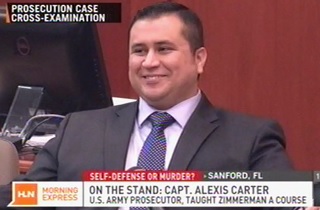 George Zimmerman defense attorney Don West began his client’s murder trial with a disastrous attempt at humor, but on Wednesday, fared better as straight man. While questioning Zimmerman’s Seminole State College criminal litigation professor, Alexis Carter, West asked if a person should have to wait “until you’re almost dead before you can defend yourself,” to which Carter replied “No, I would advise you probably don’t do that.”

The line got a laugh from defendant George Zimmerman, who otherwise has displayed little emotion during his many hours on camera during the trial.

Throughout the trial, the courtroom cameras have frequently been trained on a poker-faced Zimmerman, but when Alexis Carter took the stand Wednesday morning and greeted his former star pupil from the witness stand, Zimmerman beamed in response. On direct examination, Carter contradicted a key claim that Zimmerman had made in an interview with Sean Hannity, testifying that he had, in fact, instructed Zimmerman extensively on Florida’s “Stand Your Ground” law.

However, Carter was much more helpful to his old student on cross-examination. One of the key points made by the prosecution Tuesday was that Zimmerman’s injuries were “insignificant,” and were not “life-threatening.”

On cross-examination, West used Carter’s legal expertise to suggest that even if Zimmerman’s injuries were not serious, he might have had reason to defend himself. “Nn the issue of injuries though, when you talk about that with the class in your understanding of the law is that the focus is what’s going on in the person’s mind, not whether they have actually been injured,” West said. “It’s the fear of the injury, is it not?”

“It’s imminent injury, excuse me, imminent fear,” Carter replied. “So, the fact alone that there isn’t an injury doesn’t necessarily mean that the person did not have a reasonable apprehension of fear. The fact that there wasn’t an injury doesn’t necessarily mean there was a reasonable apprehension of fear.”

A smiling West followed up by saying “You don’t have to wait until you’re almost dead before you can defend yourself.”

“No, I would advise you probably don’t do that,” Carter deadpanned.

The courtroom camera cut to George Zimmerman, who couldn’t suppress a laugh at his old instructor’s quip.

“I take it you never know where that moment will be,” West continued.

“No, unfortunately you don’t,” Carter replied, adding that he believed a lot of his students “all probably had situations where, you know, a tussle maybe became more. So things can change. For example, a situation that may not have appeared to be deadly, or the risk of great bodily harm at first, can develop into that.”

Carter’s testimony is crucial because the prosecution can use it to establish Zimmerman’s ability to formulate a self-defense narrative, and to assert consciousness of guilt by virtue of his claim in the Sean Hannity interview. Carter’s opinions about Zimmerman’s injuries appear to help the defense, but also reinforce the level of detail in the class’ discussions of self-defense scenarios.