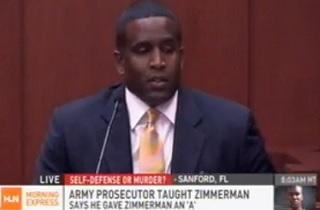 While all hell breaks loose in Egypt, the George Zimmerman murder trial continued Wednesday morning with the testimony of Alexis Carter, the adjunct professor who taught Zimmerman’s criminal litigation at Seminole State College in 2010. In a key bit of testimony, Carter told the jury that he had covered Florida’s “Stand Your Ground” law extensively for George Zimmerman’s class. He described George Zimmerman as “one of the better students,” and remembered giving him an “A” in the class.

The testimony contradicts remarks Zimmerman made in an interview with Sean Hannity last year, in which Zimmerman claimed he had not even heard of Florida’s “Stand Your Ground” law until after the incident that resulted in his killing of 17 year-old Trayvon Martin.

The prosecution was expected to introduce evidence that “Stand Your Ground” was covered in Zimmerman’s college classes, but Carter’s testimony left little doubt that the neighborhood watchman had internalized that information. Carter said that “You always remember your smartest student, or the one that stood out the most, the one that probably wasn’t the best student. He was probably one of the better students in the class.”

Asked to describe the class he taught, Carter explained that while the textbook he used was not Florida-specific, he did cover the “Stand Your Ground” law.

Asked “Did you cover that specifically,” Carter replied “Yes.”

“What can you tell us about how long you spent as part of the course covering ideas like self-defense and stand your ground?” the prosecutor asked.

“Self-defense is affirmative defense,” Carter replied. “It’s a big defense, self-defense, not one of the things you’re going to just whisk through in a day, or after you teach it you will neglect from bringing it back into the classroom. So it was something that I constantly iterated. I was the type of professor that, before I gave a test, I gave a review for the test. It was something that I think the students really wanted to know about. It was so practical. They were very much engaged in class discussion regarding the issue. I remember, you know, talking about it quite a few times. Not just on that particular occasion.”

Carter’s testimony as a fact witness was as helpful as the prosecution could expect, but on cross-examination, defense attorney Don West wisely focused on Carter’s expertise in self-defense law, rather than impeaching his testimony. On cross, Carter very effectively argued that his former student could have reasonably felt apprehension of imminent bodily injury, even without serious injuries.

However, Zimmerman’s insistence, in that Hannity interview, that he’d never heard of “Stand Your Ground” will be tough to explain to the jury, and the prosecution will surely feature that inconsistency heavily in its closing argument.