George Zimmerman Shooter Could Use Stand Your Ground Defense 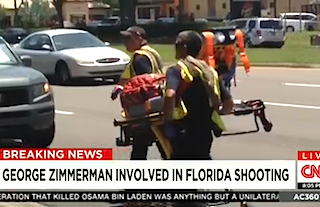 George Zimmerman, the Florida man who initially tried to use a so-called “Stand Your Ground” defense in the killing of unarmed teenager Trayvon Martin, was back in the news today after he was shot and mildly injured by a motorist with whom he had had an ongoing dispute.

Lake Mary, Florida police confirmed Monday that the motorist is Matthew Apperson, the same man who called police last fall claiming that Zimmerman had threatened to kill him. While Apperson has not yet been arrested for the shooting, if he is charged, he could potentially claim that he was standing his ground.

“I think what’s remarkable is that we are now talking about five incidents, three domestic violence incidents, two road rage incidents that have been reported, and all of them involving allegations of George Zimmerman brandishing a gun,” CNN analyst Sunny Hostin told Anderson Cooper Monday night. “That is an aggressive action. He seems to say every time he’s the victim, he’s on the receiving end. It calls into question certainly his credibility, his state of mind. What is going on with George Zimmerman?”

“And I think what is also going to be quite ironic, Anderson,” she continued, “is if this shooter is charged with aggravated assault or attempted murder, his defense will be that he was standing his ground against George Zimmerman because he feared for his life because George Zimmerman was brandishing a gun. It is just ironic at the very, very best.”

In a 911 call from the 2014 incident, Apperson told dispatchers that Zimmerman and another man threatened to beat him up and shoot him. “Do you know who I am?” Zimmerman reportedly screamed. “I’ll fucking kill you.”