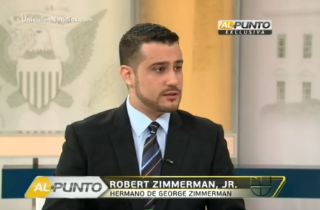 In a Spanish-language interview this weekend with Univision, accused murderer George Zimmerman’s family members claimed that the lawyers representing the late Trayvon Martin’s family have exploited the issue of racism in order to paint Zimmerman as a villain in the eyes of the public.

“Racism is a very lucrative sport in this country,” George’s brother Robert Zimmerman Jr. told Univision anchor Jorge Ramos, according to translations by Raw Story’s Arturo Garcia. “A lot of people have a hand in [that sport], and make lots of money accusing others of racism, without even proving it.”

George Zimmerman allegedly shot and killed 17-year-old black teenager Trayvon Martin back in February. Under Florida’s “Stand Your Ground” laws, Zimmerman claimed self-defense, but many of his detractors (including Martin’s family and supporters including TV personalities like Rev. Al Sharpton) have assigned racially-charged motives to the shooting.

Zimmerman’s brother reportedly explained: “From the beginning, they used the words, ‘white,’ ‘black’ and ‘gated community,’ to advance a narrative based on speculation of what might have happened that was very different from what happened that day.”

Later in the interview, Zimmerman’s brother and mother, Gladys Zimmerman, vehemently denied that George is racist. Raw Story reports that she explained that the family has “Afro-Peruvian” roots.

The family also openly took exception to President Obama’s initial reaction to the story. In March, the president said: “If I had a son, he’d look like Trayvon.” Zimmerman’s mother chalked that reaction up to the White House simply being misled by the Martin supporters: “Seeing how this case has been worked by the attorneys for Trayvon Martin’s family, I don’t blame the president,” she reportedly said. “They fooled him too.”

Zimmerman is currently out on bond awaiting a scheduled June 2013 start for his trial for the alleged murder of Trayvon Martin.