George Zimmerman’s Lawyer To Piers Morgan: ‘All The Objective Evidence’ Will Fall In Zimmerman’s Favor
video

George Zimmerman’s Lawyer To Piers Morgan: ‘All The Objective Evidence’ Will Fall In Zimmerman’s Favor 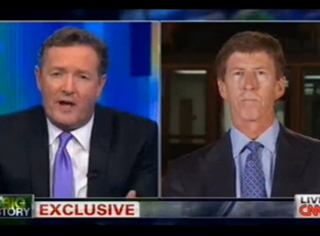 It has been a busy month for Mark O’Mara, the attorney responsible for the defense of George Zimmerman, the man who killed Florida teen Trayvon Martin. His client is now back in jail and his client’s wife accused of perjury after misrepresenting the money the two had to lower their bail, but O’Mara told Piers Morgan on his program this evening that he was confident the totality of the evidence would be in his client’s favor.

“How much of a problem is the perjury claims now over Zimmerman and his wife?” Morgan asked O’Mara, who acknowledge their credibility as “certainly affected when his wife did something that turned out to be a misrepresentation of the court,” but he argued there was far more about to come out, and with “all the objective evidence, once it’s all out, is going to be another focus… the attacks on Mr. Zimmerman’s credibility are going to pale in comparison to the undeniable evidence.”

As for the new tape released today of Zimmerman explaining the events that culminated in Martin’s death to the police, which Morgan argued appeared to construct an argument far too convenient under a Stand Your Ground Law. “He did those statements before he was aware of any other evidence,” O’Mara replied, “when he came up with that statement, he came up with it without knowing if there were half a dozen witnesses watching every move.” He added the statements were voluntary, and coupled with all the other evidence, “gives a more rounded perspective– there’s nothing that conflicts with what Mr. Zimmerman says.”