George Zimmerman’s Lawyers In Intense Exchange With Piers Morgan: ‘The Media Has Destroyed Him’
video

George Zimmerman’s Lawyers In Intense Exchange With Piers Morgan: ‘The Media Has Destroyed Him’ 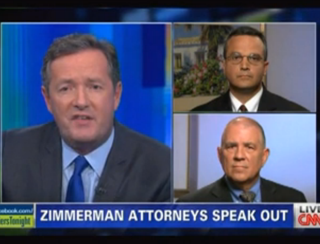 Craig Sonner, the elusive lawyer for Trayvon Martin killer George Zimmerman who tricked Lawrence O’Donnell into cross-examining a chair, emerged from media hiding tonight to talk to Piers Morgan, tonight accompanied by fellow attorney Hal Uhrig. The two lawyers appeared to on the defensive, arguing that Zimmerman legally carried his weapon and killed in self-defense, and ultimately accusing Morgan of “litigating the case in public” and refusing to answer questions.

“He’s hiding out from people who are trying to kill him,” Sonner told Morgan about his client, arguing that the police “don’t always make an arrest right away” and the only reason the courts have yet to dispense justice is “because not all of the facts of that night have come out.” Sonner continued to arguing that “there’s been no justice for George Zimmerman,” as he has been “tried and convicted in the court of public opinion based on facts that are not even true.” Sonner argued as a “fact” that Zimmerman was “beaten on the ground” before shooting.

“That’s not actually a fact,” Morgan countered, “that’s a supposition based on what George Zimmerman has told you.” Sonner didn’t disagree, only adding, “that’s why I’m telling everyone to wait.” “It’s been open season on destroying this man’s credibility,” Sonner replied, arguing that “the media has absolutely destroyed him unfairly” and accusing Morgan of being part of that unfair attack. Uhrig joined in the attack against Morgan, calling Morgan’s argument that it would be illegal for him to carry a concealed weapon to go to the store a lie. “He’s legally entitled to defend himself,” Uhrig argued, resulting in a back and forth where Morgan insisted that neighborhood watch leaders were not supposed to walk around with 9mm weapons and Uhrig making the now typical and tiresome “this is not the UK”-style retort claiming Morgan didn’t know what he was talking about.

Morgan had to take a few moments to actually tell the attorneys “I’m not trying to convict your client, I just want justice” and tell them that they “have been just as emotive defending your client as people for Trayvon Martin… and I’m not sure that does you as attorneys a lot of credit.” At some point, Sonner began repeatedly asking Morgan whether he had other questions instead of answering questions, insisting, “we’re not going to litigate this case in the public media.”

The full interview via CNN below: