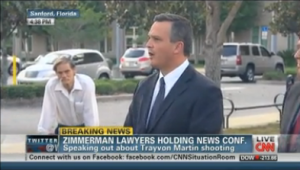 On Tuesday afternoon, Craig Sonner and Hal Uhrig, attorneys for George Zimmerman, held a press conference to announce they are withdrawing as his counsel after “losing contact” with their client. They noted that they still consider his actions the night of Trayvon Martin‘s death to have been in self-defense.

The two attorneys shared that they last spoke with their client on Sunday and have since “lost contact” with him after daily contact, adding that, if Zimmerman would like to retain them as counsel, he knows where to reach them.

They added that they had not approved of the way he handled a website created without their consent, and that they “believe,” although cannot confirm, that Zimmerman had reached out to Fox News’ Sean Hannity off the record, later refusing to tell them what he’d shared.

Update: On last night’s program, Hannity confirmed having spoken to Zimmerman off the record. It appears around the 02:48 mark in the video.

Update II: Mediaite has heard that Hannity will be addressing his talk with Zimmerman on his show tonight.

The “final straw” was finding out that Zimmerman had reached out to the Special Prosecutor Corey’s office directly, without first consulting them. “We were a bit astonished,” they noted, adding that the Special Prosecutor’s office had refused to speak to Zimmerman without his counsel, only to have been told by Zimmerman that he merely had “legal advisers,” not attorneys.