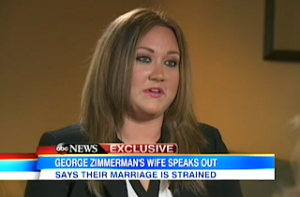 In her first interview since her husband George Zimmerman was acquitted for the murder of Trayvon Martin, Shellie Zimmerman told ABC News that there were troubles in her marriage before the shooting occurred, and that those problems have only gotten worse following the trial. “Of course I want to have children and stay married,” the 26-year-old Zimmerman said, but divorce is “something I’m going to have to think about.”

Shellie Zimmerman revealed that that night Trayvon Martin was killed she was staying at her father’s house nearby because she and George had “gotten into an argument the night before.” Still, she told investigative reporter Christi O’Connor that her husband would not have been capable of “profiling” Martin, because “that’s just not his way.”

She has pleaded guilty to perjury charges of her own for lying on behalf of her husband about how much money they had to a judge. “I can rationalize a lot of reasons for why I was misleading, but the truth is I knew that I was lying,” Shellie Zimmerman said. “I wish a lot of things were different. I can’t tell you how many times I have laid at night saying God, I wish these circumstances had been different.”

While she sat beside him in court throughout his weeks-long trial, George Zimmerman did not show up in court this week, a fact for which Shellie had no explanation. “I always want my husband’s support,” she said. She also said it was not “appropriate” for George to pose for photos this past week at the gun manufacturing plant that made the gun his used to shoot Martin.

At the end of her interview, Shellie Zimmerman issued what appeared to be a heartfelt apology to Trayvon Martin’s family. “I’m so deeply sorry for their loss,” she said. “I can’t even begin to understand the grief that a parent experiences when they lose a child.”

[Ed. note: A previous version of this post indicated that Shellie Zimmerman is “facing” perjury charges. It has been corrected to reflect that she has pleaded guilty.]