George Zimmerman’s Wife Testifies At Bail Hearing: He Left The State While He Was ‘In Hiding’
video

George Zimmerman’s Wife Testifies At Bail Hearing: He Left The State While He Was ‘In Hiding’ 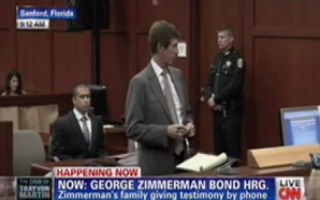 George Zimmerman, accused of the February murder of Florida teen Trayvon Martin, appeared in a court on Friday morning for a bond hearing. Zimmerman’s wife testified as a witness, but had to concede that he “left the state” while he was in “hiding.”

At the start of the bond hearing, Zimmerman appeared in court in civilian clothes instead of a prisoner’s jumpsuit as was the request of his counsel.

Zimmerman’s wife, Shelley Nicole Zimmerman, testified over the phone. She said she understood that the court’s concern is that if a bond was issued that Zimmerman could be a flight risk. The court is also concerned that a bond, which could be in excess of six figures, would be excessive for the Zimmerman’s to afford. Zimmerman’s wife conceded that she is a nursing student and is not working and they do not own their home. She further asserted that there is no asset that her family could liquidate to make bail.

Mrs. Zimmerman said that she had “no concern whatsoever,” that her husband was a “danger to the community.”

The prosecuting attorney, Bernardo De La Rionda, examined Mrs. Zimmerman and she agreed that her husband was accused of a violent crime but that he did not have a “violent history.” When the prosecution outlined his history of violent crimes, including battery of a law enforcement officer and obstructing justice, she conceded that Zimmerman had informed her of those crimes.

De La Rionda further outlined an incident and read testimony from a woman who claims Zimmerman slapped her in the mouth. Mrs. Zimmerman countered that he filed an injunction against that woman. She reasserted that Zimmerman is not a threat to the community.

De La Rionda brought up a website established to fund Zimmerman’s defense. Mrs. Zimmerman conceded that Zimmerman left the state while he was “in hiding.”

The prosecution highlighted that both Mr. and Mrs. Zimmerman felt like they were in physical danger and Mrs. Zimmerman said she received “hate mail” which she would turn over to the attorney. However, she admitted that mail contained no threats.

O’Mara asked Mrs. Zimmerman to qualify the assault on the police officer. She testified that the officer in question was in plain clothes at the time and was in the process of helping a “friend” who he believed was being assaulted by the officer. O’Mara asked if law enforcement identified themselves as such, as the report on the incident makes clear they did. Zimmerman’s wife said that was “not true.” She did, however, concede that Zimmerman had to attend anger management courses as a court order.

Watch the hearing below via CNN: