The owner of a gas station in Georgia is under fire from just about everybody this week for putting up a sign on the door of his establishment that uses an anti-gay slur in an effort to get his customers to stop wearing sagging pants when they come inside. A local news report on the sign from WSB-TV blurs out the word in question, but you can get the idea: 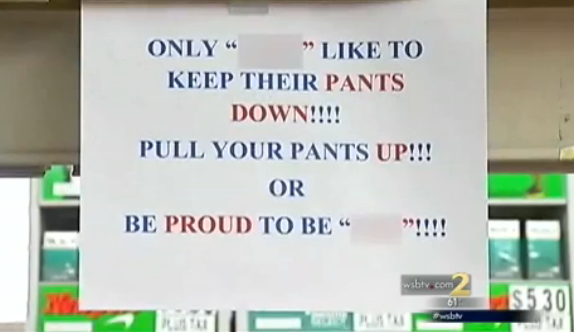 “I came up with that sign, nobody else did,” owner Anil Patel told the reporter who got him on the phone from out of town. “Since that sign went up there, I don’t see no pants down in my store, because they read the sign and they decide what they want to be.”

“It really offends me by them coming in, pants down,” Patel continued. “So it is not that I’m against them, gay people or anything like that, but just trying to prove a point. If you are going to come in my store, make sure you have your pants on.”

“I couldn’t believe they put something like that up,” one customer, Joshua Southern said, who will no longer be shopping at the store. “There is other ways to deal with it. You could say, ‘Pull your pants up. Nobody wants to see your butt.'”

On the other hand, Kerrie Williams, a clerk at the store said, “It doesn’t bother me, not a bit. I have a girlfriend and I am gay.'”

Watch video below, via WSB-TV: