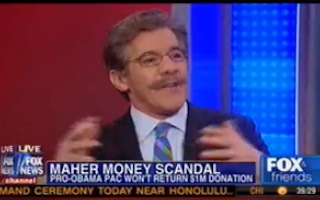 Geraldo Rivera sat down with Fox and Friends on Friday and played devil’s advocate for Bill Maher, arguing his right to say controversial things, saying he believed the marketplace was the best decider. Co-host Gretchen Carlson thought Maher was hiding behind the defense that he was a comedian so he could say whatever he wanted.

“It’s okay for Bill Maher to say those things about women?” Carlson asked.

RELATED: Van Susteren And Kirsten Powers On Media Misogyny: Obama And Super PAC ‘Will Look Other Way’ If You ‘Pony Up’

“I go back to the marketplace, Gretchen,” Rivera said “I believe that the market will weed out the people who offend public sensibility. I was at ABC for a long time. In 2001, before I came here and I was at ABC, I remember Bill Maher shortly after 9/11, a week after 9/11, someone said, ‘those cowards attacked the towers’. He said, ‘wait a second, they weren’t cowards. They killed themselves. The cowards are those who lob missiles’…In the post 9/11, he was fired from ABC. I opposed his being fired, but I understood it. Listen, I think that there has to be civility in discourse. You laugh when you see an old lady slip on the ice. You can make that funny even though it’s horrible. I think comedy, people have to look into their own hearts [to understand] what makes them laugh.”

Eric Bolling asked whether President Obama should call Sarah Palin like he did for Sandra Fluke.

Rivera began by saying the two were very different people.

“I’m telling you — listen, I love when women unite to put down that…”

“They rarely do!” Carlson added.