Geraldo: ‘Benghazi-Gate’ Scandal Is A ‘Cancer On The Presidency’
video

Geraldo: ‘Benghazi-Gate’ Scandal Is A ‘Cancer On The Presidency’ 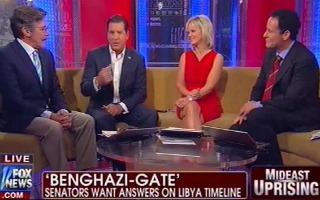 Geraldo Rivera appeared on Fox & Friends where he slammed President Barack Obama‘s administration for misleading the American people as to their level of knowledge about the attacks on a consulate in Benghazi that resulted in the death of four Americans. After saying last week that the administration was probably being “disingenuous,” Rivera now said that it was clear the administration knew that they were not telling the truth by the weekend after the attacks. He said the ‘scandal’ represents a “cancer on the presidency.”

Eric Bolling recounted how he and Rivera fought last week over the political impact of the mischaracterization of the attacks in Libya by members of the Obama administration. Rivera conceded that, by Sunday when U.N. Ambassador Susan Rice went on the Sunday talk shows the weekend after the attacks, it was known that the Libya attack was terrorism.

“The reason we call it ‘Benghazi-gate’ is because it contains the grim prospect that the administration knew or should have known the true nature [of the attacks],” said Rivera before Bolling cut him off.

“Bret Baier reported last night that he had two credible sources saying that within 24 hours of those attacks that killed four people, the administration knew,” said Bolling.

Gretchen Carlson became frustrated when she said that it was unlikely that the average American knew the full extent of the cover up of information the administration had on Libya.

“Clearly when U.N. Ambassador Rice spoke on the Sunday talk shows, they could not not have known that this was an act of terror by that point,” said Rivera.

“I don’t understand how they can get away with this and there be no repercussions,” Carlson asked.

“I don’t think they’re getting away with it at all,” Rivera concluded.