Geraldo, Bolling Clash Over Iran: ‘Sometimes I Wonder If You Actually Believe This Stuff’
VIDEO

Geraldo, Bolling Clash Over Iran: ‘Sometimes I Wonder If You Actually Believe This Stuff’ 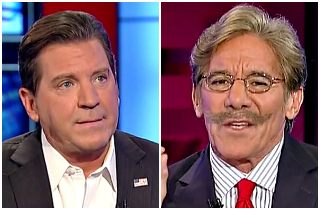 The Five co-host Eric Bolling at Fox News host Geraldo Rivera had a “bellicose” debate—Rivera’s word—over whether the United States should trust Iran under its new, supposedly more moderate leadership in Hassan Rouhani, an idea Rivera has been pitching since landing an exclusive interview with Iran’s foreign minister.

“Given the first conversation between the American and Iranian presidents in almost thirty-five years, isn’t it time to give peace a chance?” Rivera asked.

“No,” Bolling answered. “They are the state sponsored terror capital of the planet. Some would call them the central bank for terror…You want to trust the Iranians? You want to trust the people who said they won’t rest until Israel is wiped off the map? You can’t trust these people.”

Bolling and Rivera disagreed over the whether the majority of 9/11 hijackers had been Iranian or Saudi, with Bolling arguing that they all spent time in Iran before the attack.

“I had sixteen friends die in the World Trade Center,” Bolling said.

RELATED: The Five Hits Obama for ‘Negotiating’ with Iran But Not the GOP

“I had plenty of my own,” Rivera replied. “Don’t claim the moral high ground.”

“I’m not,” Bolling said. “I looked in the faces of sixteen of my friends’ wives and families and said I don’t know why terrorists killed my friend and your father. I have a lot of passion about it. 1979—You know why that year is relevant? That was the year that Ronald Reagan picked up the phone and said let our hostages go right now, because there’s a new sheriff in town, if you don’t there won’t be any more Iran. Guess what happened? They let the hostages go. That was the last time an American president or diplomat sat down with Iran. President Obama is an apologist. He’s an apologist for terror, he’s an apologist for political correctness with Islam. These are evil people. You can’t negotiate with terrorists.”

Rivera asked if Bolling thought the Iranians had played a positive role in the conflict in Syria, given their history of being on the receiving end of Saddam Hussein’s chemical weapons, which Rivera intimated were supplied by the United States.

“Oh, Geraldo, you’re going to pin this on the Americans when Iranians have been known to sell chemical weapons?” Bolling said. “Sometimes I wonder if you actually believe some of this stuff.”

The two shook hands at the end, proving there is in fact hope for detente.