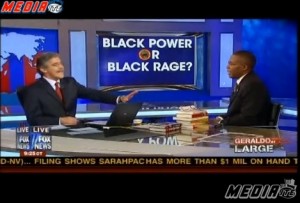 Fox News host Geraldo Rivera continued his network’s conspiracy-defying publicity tour for New Black Panther Party Chairman Malik Zulu Shabazz this weekend, confronting him with a clip from Mediaite’s interview with Shabazz in which he promises “direct opposition” to Glenn Beck‘s “Restoring Honor” rally. While I agree that Glenn Beck has the right to “access the Lincoln Memorial,” Rivera uses some dissonant logic to make that point.

Here’s the clip from Geraldo at Large: (thanks to Geraldo for properly crediting Mediaite)

Note to Geraldo’s production staff: don’t fade the audio on the first quote your guy is going to reference.

First of all, I disagree with Shabazz that (among other things) Glenn Beck should not be allowed to have his rally. This is a free country, and unpopular speech is the most in need of protection. Whether Beck’s rally is an affront to the legacy of Martin Luther King, or not, is irrelevant.

But in making the case that white people have just as much right to access the Lincoln Memorial as black people (a straw man to begin with), Rivera seems to fairly boast that the “majority” of those who fought the Confederacy in the Civil War were white, and that white people put Abraham Lincoln in office.

First, to paraphrase Chris Rock, “You weren’t supposed to have slaves to begin with, you low-expectation-having motherf***er!”

As to his second boast, that a majority of those who voted for Abraham Lincoln were white, that is as true as the fact that the majority of home runs in the 1946 World Series were hit by white people. What, you want a cookie?

Whether he has the right or not, I don’t even think Beck should be prevented from holding his rally. I think it reveals something about him, and those who attend. That Glenn Beck believes that the Civil Rights movement needs to be taken back from black people shows that he is completely ignorant of the fact that the progressives, whom he calls a cancer, have been happily sharing it all along.

This is all part and parcel to the crowd who think that black people ought to just “get over it,” an easy enough demand when you’ve never experienced the thing to be gotten over. While black grievances, past and present, are numerous, there’s one story that has stuck with me as perfectly illustrative of the horror of the black experience in America. Former slave Mary Armstrong told the story of how her Master’s wife whipped her 9 month-old baby sister to death with a diaper, for crying. Get over that.

What Beck misses, though, and what I think Malik Shabazz also doesn’t understand, is that most black people aren’t all that angry anymore, or at least not that kind of angry. No matter how much the right tries to promote the New Black Panther bogeyman, there’s just not much support for them out there. President Obama is living proof of the transformation of black politics, in which the schism between militancy and working within the system was resolved long ago.

Buried in this Geraldo clip, by the way, is what sounds like a walkback by Shabazz of his promise to meet Glenn Beck on August 28. Now, he says he’s going to confer with black leaders to see if his organization should “make a move on this.” Reverend Al Sharpton has already said he doesn’t think there should be counter-protests, so perhaps Beck and his fans will have the Lincoln Memorial all to themselves on August 28.