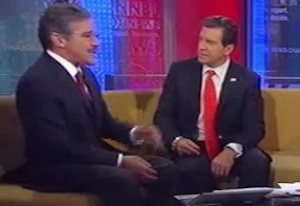 On Friday’s Fox and Friends, guest anchor Eric Bolling and Geraldo Rivera duked it out over Occupy Wall Street. “Those complaining that the system is rigged have a beef,” Rivera argued. “What is the point, Geraldo?” Bolling interjected. “Let’s be honest, what is the message? Do you know what it is?”

“What system is better?” Bolling fired back.

“What has to happen is that our system — the best system ever conceived, has to be cleansed of the dishonesty that’s which is now institutionalized in the system,” Geraldo responded.

Brian Kilmeade countered that the protesters’ tactics were turning off Main Street America to their message.

“This movement has spread across the planet. You cannot deny that there’s something going on here. I think the more we concentrate on the freaks that are acting out, the more we miss the message that there’s a full generation here disgruntled, disillusioned and frightened for their future.” Rivera observed.

“You’re acting like these are isolated incidents!” Bolling pointed out. “There are 300 incidents of defecating on police cars, of rapes, of molestations, of methamphetamine being transfered and sold.”

“I so totally disagree with you. That is absolutely hyperbole! Give me a break!” Rivera exclaimed.

Watch the two Fox News personalities chide each other over Occupy Wall Street: