Geraldo Investigates: Is There A ‘Lesbian Cabal’ Leading The Department Of Homeland Security?
video

Geraldo Investigates: Is There A ‘Lesbian Cabal’ Leading The Department Of Homeland Security? 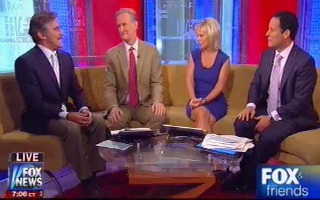 On Friday, Fox News Channel’s Geraldo Rivera appeared on Fox & Friends to discuss a variety of issues, but first weighed in on a story which implicates some female members of the Department of Homeland Security and the U.S. Immigration and Customs Enforcement agencies of engaging in sexual discrimination and harassment. Rivera, reading into the subtext of the story, immediately asked if the hosts were implying that there is a “lesbian cabal” which has taken over DHS.

Gretchen Carlson first noted the allegations that DHS and ICE were embroiled in two scandals involving discrimination and sexual harassment.

When Rivera joined the Fox & Friends hosts to discuss a variety of topics, he felt that

“What do you think,” asked Steve Doocy.

“It just seems like everyone is talking around it,” said Rivera. “Is that really what people are saying? That men are disadvantaged and that women, specifically lesbians, are ruling the roost there?”

“It just seems that everyone is dancing around – making these inferences,” Rivera continued.

Brian Kilmeade answered that “we don’t know for sure” if there is a lesbian cabal at the helm of DHS, but “it’s easy to come to that conclusion that there is a different type of glass ceiling separating the Homeland Security Department in this case.”

The hosts laughed for several seconds before moving on to discussing another topic.