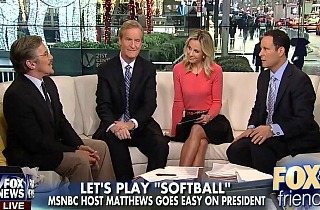 Fox News Channel host Geraldo Rivera and the hosts of Fox & Friends openly mocked MSNBC and host Chris Matthews on Friday for his performance during an exclusive interview with President Barack Obama. Rivera called Matthews a “fan” of the president and the hosts dismissed the network as a place that does not specialize in “objective” analysis.

Rivera reacted to Matthews’ interview of the president by saying that he has worked with the MSNBC host in the past and likes him personally. “But to pretend that Chris is a journalist, per se, I think that’s sort of artificial,” Rivera observed.

“He’s a failed Democratic candidate for Congress,” Rivera continued. “He’s been a Democrat his whole life. It was more of a fan, you know – not a sycophant – but a fan. An adoring constituent rather than a hard journalistic question.”

RELATED: Matthews Confronts Obama About ‘Resistance’ from Young People to Signing Up for Obamacare

“He obviously appealed to his pal, to somebody he wanted to build back up,” he observed.

“If you watch MSNBC, Brian, you know what you’re getting,” Rivera replied. “Do you watch MSNBC to get an objective take on the president’s performance?”

“That’s the reason he went to MSNBC,” Steve Doocy said. “You want to be interviewed by somebody who you’re talking to and you’re wondering, is he having a tingle right now?”