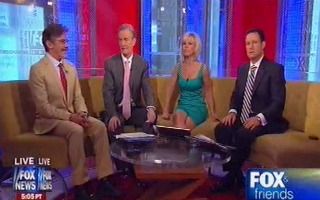 Geraldo Rivera appeared on Fox & Friends on Friday where he weighed in on Thursday’s “Fast and Furious” hearings between Attorney General Eric Holder and members of Congress. Rivera told the Fox hosts that Republicans made a political calculation to pursue “the destruction of the first African American Attorney General in a presidential election year.” Rivera also said that “Republicans, having made their point now, should just declare victory and move on.”

Rivera was asked to weigh in on yesterday’s Congressional hearings into the “Fast and Furious” gun walking scandal. Fox & Friends played a clip of the contentious testimony between Rep. Trey Gowdy (R-SC) and Holder where the two argued over whether the Attorney General was a polarizing figure that was subject to political attacks.

“Mr. Attorney General, you have a difficult job,” said Rep. Gowdy. “But if you think that you’re being singled out because of political ideology or race or any other characteristic or factor – when it comes to Fast and Furious – you are sorely mistaken.”

Rivera called Gowdy’s question an “ad hominem attack.” However, Rivera conceded that he could understand the investigators frustration with Holder – having testified on this issue eight times in the past. He also said that there is reason to believe, based on recently released documents, that people close to Holder were well informed on the details of Fast and Furious.

Co-host Steve Doocy asked if he thought this was a “witch hunt” to which Rivera replied that it “may or may not be.” What Rivera said was more relevant was that the Republicans made a calculation; that “the destruction of the first African American Attorney General in a presidential election year — I’m just surmising — I think that it’s all about politics now.”

“Republicans, having made their point now, should just declare victory and move on,” Rivera concluded.