Geraldo On The Delay In Reporting Iran’s Attack On U.S. Drones: President ‘Had His Plate Full’ With Election
Video

Geraldo On The Delay In Reporting Iran’s Attack On U.S. Drones: President ‘Had His Plate Full’ With Election 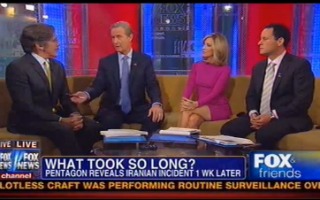 Geraldo Rivera stopped by Fox & Friends‘ curvy couch on Friday, where he was asked about the fact that an Iranian jet attack on U.S. drones had gone unreported until a week after the election.

“It is officially an act of war; I agree with that,” said Rivera. “Now jump cut to the question of why we didn’t know about it initially? Our Jennifer Griffin reports that it was a classified mission. That’s one of the reasons they gave for not revealing it. But I think it’s pretty clear, like the response to the storm, that there is a political component to this and, you know, what happens if this news breaks before the election? Then the President is then pressured — ‘What are you going to do about it?’ — and he had his plate full. I think there was a political calculus: ‘We can deal with this later in a couple of days, you know, a week from now. Like the Benghazi situation, let’s postpone it ’til after the election. I’ve got enough to worry about.'”

“I still go back to the biggest imponderable in the presidential race,” he added later, “why [Romney] did not bring Benghazi up in the second and third debate. You wonder what kind of briefing he had then that perhaps dissuaded him from bringing it up. In the case of the drones, you know, I believe there is a political component.”