Geraldo Reacts to Zimmerman Arraignment: ‘He’s a Borderline Psychotic at This Point’
VIDEO

Geraldo Reacts to Zimmerman Arraignment: ‘He’s a Borderline Psychotic at This Point’ 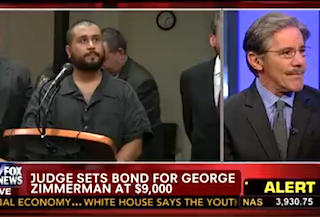 Zimmerman’s bail was set at $9,000, he was ordered to wear an electronic monitoring device and stay at least 1,500 feet away from the residence where the incident occurred. The judge declared he would be denied the use of guns until the issue is resolved. In addition, prosecutors revealed that Zimmerman’s girlfriend Samantha Scheibe reported to them another choking incident that occurred one week earlier.

Immediately following the arraignment, Geraldo Rivera shared his thoughts about Zimmerman on Fox News. “My basic reaction is that this man is hanging by a string. I think that he is a borderline psychotic at this point,” he said. Rivera described Zimmerman as “a person who has so immersed himself in the gun culture.” And while “He was lionized by many–by some at least–as a hero, he has no clear direction in his life… I think he’s a very, very dangerous person and he could hurt this woman.”

At the same time, Rivera added, “Given the weight of the evidence, the judge was prudent in this case. He was not at all punitive to George Zimmerman. He could have hit him with a much higher bail. He could kept him with no bail because of the risk of violence to this woman.”