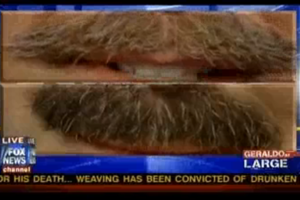 It began like a scene out of Jimmy Fallon‘s wildest dreams: a mustache face-off between Fox News’ top upper lips, Geraldo Rivera and John Stossel. The pair dueled (showed off their facial hair simultaneously on camera) for a good cause: prostate cancer awareness. And contrary to Fallon’s prediction, the two mustaches got along swimmingly! Their owners, however, did have a point of contention: government funding of disease research, the very thing their hair was meant to promote.

Over the weekend, Rivera took a break from the week’s news to champion a noble cause: “No-Shave November,” in which men let their beards grow to help promote early detection of prostate cancer and call for further government funding. Stossel showed up to promote the cause; however, he had a bone to pick with lobbyists and activists who work only in support of certain diseases. “Tt’s a disgusting part of our political system that if you have a lobby, if you’re trendy, you get the research money,” Stossel argued, noting that diseases like diabetes are often underfunded to the benefit of illnesses like AIDS or breast cancer simply because their activists aren’t as loud.

Rivera, for his part, complimented breast cancer activists as “having their act together,” and suggested instead that those who are more interested in other diseases should do the same. To this Stossel agreed, and noted it was “good that we can help even that out.”

Except the way they were going about this “evening out”– calling for more early detection– is what Stossel would call a “scam,” noting that often this involves doctors using “unnecessary” and “controversial” tests in an attempt to avoid lawsuits or spend insurance money. Yes: John Stossel is so anti-establishment, that he can promote and bash a charitable cause simultaneously.

The excerpt from this weekend’s Geraldo at Large on Fox News below: