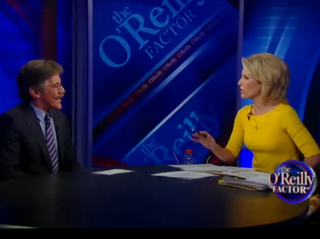 Geraldo Rivera appeared on The O’Reilly Factor last night to talk to Laura Ingraham about Operation Fast and Furious, and the subsequent contempt vote for Attorney General Eric Holder clearly upset him as “political hackery.” Ingraham and Rivera got into a bit of a shoutfest over the matter, as Rivera challenged the audience to stop asking about Holder’s motives and instead ask, “What is Darrell Issa hiding?

“I don’t understand for the life of me how Darrell Issa and this committee could expect a criminal contempt to result in an indictment,” Rivera told Ingraham, adding that the real question in the matter was the motivation driving Rep. Issa and not Attorney General Holder. “Why is he so intent on creating a scandal that will go away because John Boehner and the Republicans need this like they need a hole in the head?” Rivera asked, adding that projects like Fast and Furious “happen all the time and is a horrible idea.”

Ingraham then began to ask questions about the “wiretap bombshell” and whether he considered Rep. Issa a “hack,” which led to Rivera raising his voice about the matter and asking her to stop interrupting him. He continued to be upset about those who “invoke Brian Terry‘s name to make a political point,” and argued that this would end with House Speaker Boehner leaving to go fry bigger fish while “Issa will return to the obscurity of the Oversight Committee.”