Geraldo Apologizes For Hoodie Comments: ‘I Have Obscured The Main Point’
video

Geraldo Apologizes For Hoodie Comments: ‘I Have Obscured The Main Point’ 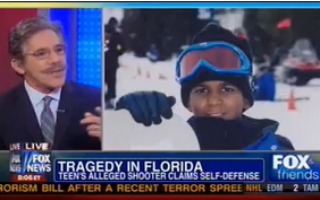 It’s amazing to think that it was only four days ago that Geraldo Rivera told the hosts of Fox & Friends that the hoodie that Trayvon Martin was wearing the night he was shot was “as much responsible for Trayvon Martin’s death as George Zimmerman was.” The comment landed on the Martin powder keg like a lit match, inciting massive reproach from the media, the Internet, and even Rivera’s own family. Just last night, Rivera was still receiving a blowback in the form of a biting Colbert Report segment. However, until now, Rivera has remained firm on his controversial assessment. But that seems to have ended as Politico is reporting that the Fox News correspondent has apologized.

Politico quoted from an email they received from Rivera and, while he does apologize to anyone offended by what he said, the quote seems to indicate that he still believes that he was just, as a father, trying to protect young men of color.

“Geraldo Rivera is apologizing for his ‘hoodie’ remarks about Trayvon Martin that touched off a media firestorm last week, saying, ‘I have obscured the main point that someone shot and killed an unarmed teenager.’

‘I apologize to anyone offended by what one prominent black conservative called my ‘very practical and potentially life-saving campaign urging black and Hispanic parents not to let their children go around wearing hoodies,’ Rivera said in an email to POLITICO Tuesday.”

Watch the video with original comments from Fox News below: